Philly could elect its first millennial to City Council, where the average age is 58

Philadelphia is one of the few big U.S. cities without a millennial on council, despite residents aged 23 to 38 being the largest age bracket living here.

Katherine Gilmore Richardson had spent 11 years working in City Council when she decided to run for a seat herself. So she was surprised to get pushback from people telling her to wait her turn.

“If I had a dollar for every time I heard that phrase, ‘Wait a few years,’ or, 'But you’re so young!’” said Richardson, 35, a mother of three and former chief of staff to Councilwoman Blondell Reynolds Brown. “I really didn’t think about my age. I didn’t feel I was too young. I felt as though I was ready.”

In a primary year with the most candidates for Council since 1979, about one-third are younger than 40. That’s notable, since Council now has no member younger than 45 and has never had a millennial member. (Millennials are defined by Pew as being born between 1981 and 1996, or now ages 23 to 38.)

Ten candidates — eight vying for at-large seats, two taking on district incumbents — are millennials. Sixteen candidates across all Council races are 40 or under. It’s not exactly a field of recent college grads, though. Most are between 35 and 40.

Most of the under-40 candidates are Democrats. Republican Irina Goldstein, 34, is the first woman on the GOP Council at-large ballot since 2007. Danny Tinney, 37, is also running as a Republican for the office.

“I think what you’re seeing is the continued generational shift,” said Andre Del Valle, president of Philadelphia Young Democrats and a staffer for Councilwoman María Quiñones-Sánchez. “Unfortunately, we’ve seen too much of the same, and I think people want to be that new voice, that new change, that new perspective, at all the levels.”

Almost all of the younger candidates are running for the first time, mirroring a national trend, particularly in the Democratic Party, of younger progressives running for office. And in Philadelphia, it could signal a shift away from long-established party candidates, as the party seems to be catching on. The Democratic City Committee endorsed two millennials for at-large seats — Richardson and Isaiah Thomas, an educator and third-time candidate.

“Millennials, we are old now,” said Thomas, 34, who made his first run for Council at 26. “The first time I ran, I think people felt like I just wasn’t old enough. There was also a different electorate, more baby boomers then.”

From Congress down, representation in politics is getting younger. The House has 26 members who are millennials, up from five in 2017. Of freshmen members, more than one-fifth are between 23 and 38, including Alexandria Ocasio-Cortez, the youngest woman ever elected to Congress, at age 29. Fourteen of the 20 are Democrats.

Locally, interest in politics has grown among millennials. The Philadelphia chapter of Young Democrats went dormant during President Barack Obama’s second term, only to return in 2016 after President Donald Trump was elected. Last cycle, a record number of people — many of them younger — ran to be party committee people.

Kate McGlinchey, president of Young Involved Philadelphia, an organization of young civic leaders, said there’s been high interest for more workshops on how to run for office in the city.

“There’s a huge population here under 40." McGlinchey said. "We’re living here, working here, contributing to the city, and I think it’s really exciting we might have people in city government really focused on working for our interests — affordable housing, working on schools, things people who might want to start families here would care about.”

Biographically, the field of 40-and-under candidates doesn’t share much beyond age bracket. It includes teachers, consultants, nonprofit leaders, business owners, and members of organized labor. Several have worked in government before. Three of them — Richardson, Lauren Vidas, and Justin DiBerardinis — have worked for Council members. Eryn Santamoor worked for former Mayor Michael Nutter and Thomas worked in the City Controller’s Office.

At 26, Adrián Rivera Reyes is the youngest candidate running at large. He’s one of two self-pronounced democratic socialists in the field (Sherrie Cohen is the other). He’s also gay and a scientist — two perspectives also currently missing from Council, he said.

“A lot of times people talk about being a voice for the voiceless, but the voiceless don’t need someone else to speak for them — the voiceless need a microphone,” Reyes said. “We are the generation that really hasn’t seen what American prosperity is. We’re overburdened with school debt, and then we worry about building wealth and buying property, so how can our issues be at the table if no one from our community is at the table?”

Compared with the population of city residents 25 and older, Council incumbents are overrepresented in the 45- to 54-year-old age bracket, and their challengers fall heavily in the 35-to 44-year-old range.

Percentage of the 25-and-older population in each group 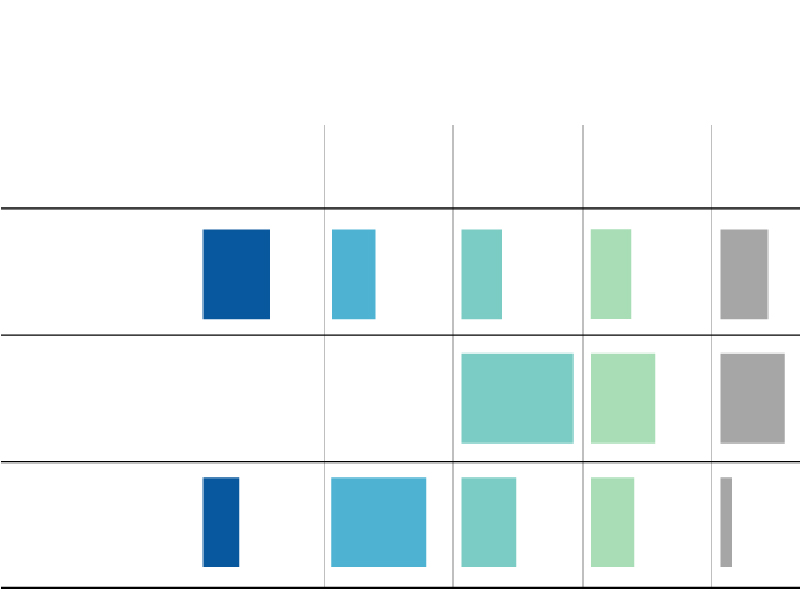 Percentage of the 25-and-older population 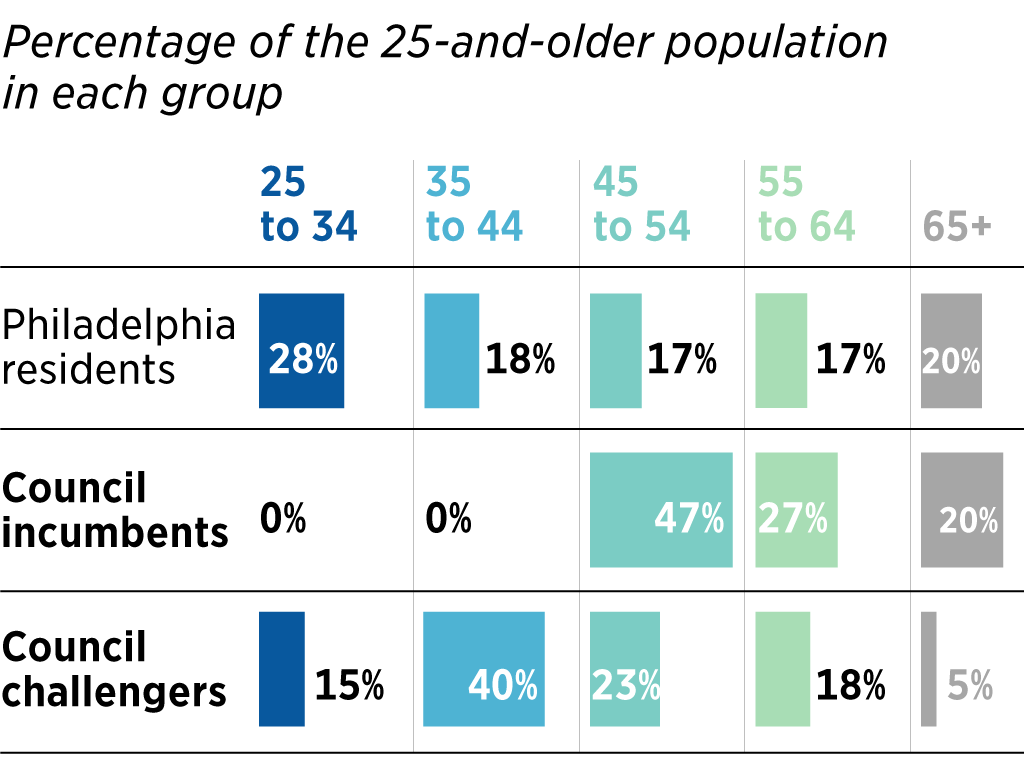 Still, several candidates said they get asked more about their age than they expected.

“I think of myself as a grown man, but apparently, getting out here as a candidate, a bunch of people think I’m, like, 23,” said DiBerardinis, who is 37.

DiBerardinis, son of the city’s longtime former managing director, Mike DiBerardinis, worked in City Council and then at Bartram’s Garden in Southwest Philadelphia. He said he believes elected officials need to look 40 years ahead. "I don’t know how young voices can be absent from that conversation,” he said.

For Richardson, who has two young children and a teen, questions about her age typically dovetail with whether she can handle motherhood and politics.

“News flash: Moms have been doing this for years," she said. “We can multitask. We can have careers, and we can step up and into positions of responsibility and lead. The fact that I do have young kids, that really makes me even more qualified to run right now, because I’m debating what kindergarten is my daughter headed to. I’m literally looking at education from a real-time perspective.”