The “son of the Second Councilmanic” faces off against Lauren Vidas, a lawyer, lobbyist and good-government advocate hoping for a major upset on Primary Day.

At first glance, Lauren Vidas could be labeled a stereotypical gentrifier.

She’s a white lawyer and lobbyist who moved into the once predominantly black Graduate Hospital neighborhood a decade ago, and lives there with her partner and two dogs. But she’s running for City Council, she says, to prevent longtime district residents from being displaced and to ensure that neighborhoods like nearby Point Breeze develop fairly and transparently.

Her opponent in the Democratic primary, Councilman Kenyatta Johnson, who has represented the 2nd District for eight years, was born and raised in Point Breeze, and has made those roots a central part of his reelection campaign. His motto: “From Here. For Here.”

He’s expanded tax-relief programs for longtime residents and helped airport workers get a living wage. But he also has faced scrutiny over city land transactions that benefited friends. A jury two years ago found that Johnson had violated the rights of Ori Feibush, a developer and Johnson’s 2015 primary challenger, by using councilmanic prerogative to prevent Feibush from buying lots in the district. Feibush was awarded $34,000.

The 2nd District contest is among the races that have positioned the May 21 primary as a potentially groundbreaking election for the city, with more candidates vying for Council than in any year since 1979. (Michael Bradley, an Army veteran and head of the Grays Ferry Civic Association, is running uncontested for the 2nd District Republican nomination.)

The race highlights a citywide conversation about Council’s power over land deals and pits a party-backed incumbent with significant financial support against a first-time candidate touting government reform.

“People have seen scandal after scandal coming out of City Hall,” Vidas said. “What they don’t see is progress in their community, and by progress I mean clean streets, I mean making sure folks aren’t displaced by developers and gentrification.”

Johnson calls Vidas, who has lobbied for the soda industry, “a hired corporate gun,” and questions her support beyond Graduate Hospital, where she led the neighborhood association SOSNA.

“She was at the helm of an organization, SOSNA, that totally gentrified the entire neighborhood,” Johnson said. "Now all the sudden, you have a progressive cloak on, as though you’re advocating for affordable housing? There isn’t a track record that shows that’s been her agenda.”

The district includes 15 neighborhoods, including Point Breeze, Graduate Hospital, portions of South Philadelphia, the Navy Yard, Eastwick, and Grays Ferry. Since 2010, the district’s population has grown by 7,500.

Johnson defended his ability to represent such diverse neighborhoods and residents. He sponsored the law to expand the longtime owner-occupied property tax relief program (LOOP) from 10 years to the life of the owner. He also authored a law that expanded the senior tax-freeze program to reach more low or moderate-income residents in the district.

Johnson defends councilmanic prerogative — the effective veto power Council members have over land use in their districts — as a way to give the community a voice, like when he helped block an apartment complex from going up on city-owned land in Eastwick due to neighbor complaints in 2012. Councilmanic prerogative also played a role in securing votes to improve wages for at the airport despite intense lobbying by American Airlines.

“Low-wage black and immigrant workers working at the airport, ... their lives are totally transformed because of his leadership and willingness to take on some of the city’s largest employers," said Dermot Delude-Dix, a spokesman for Unite Here, the union representing food-service industry workers at the airport. 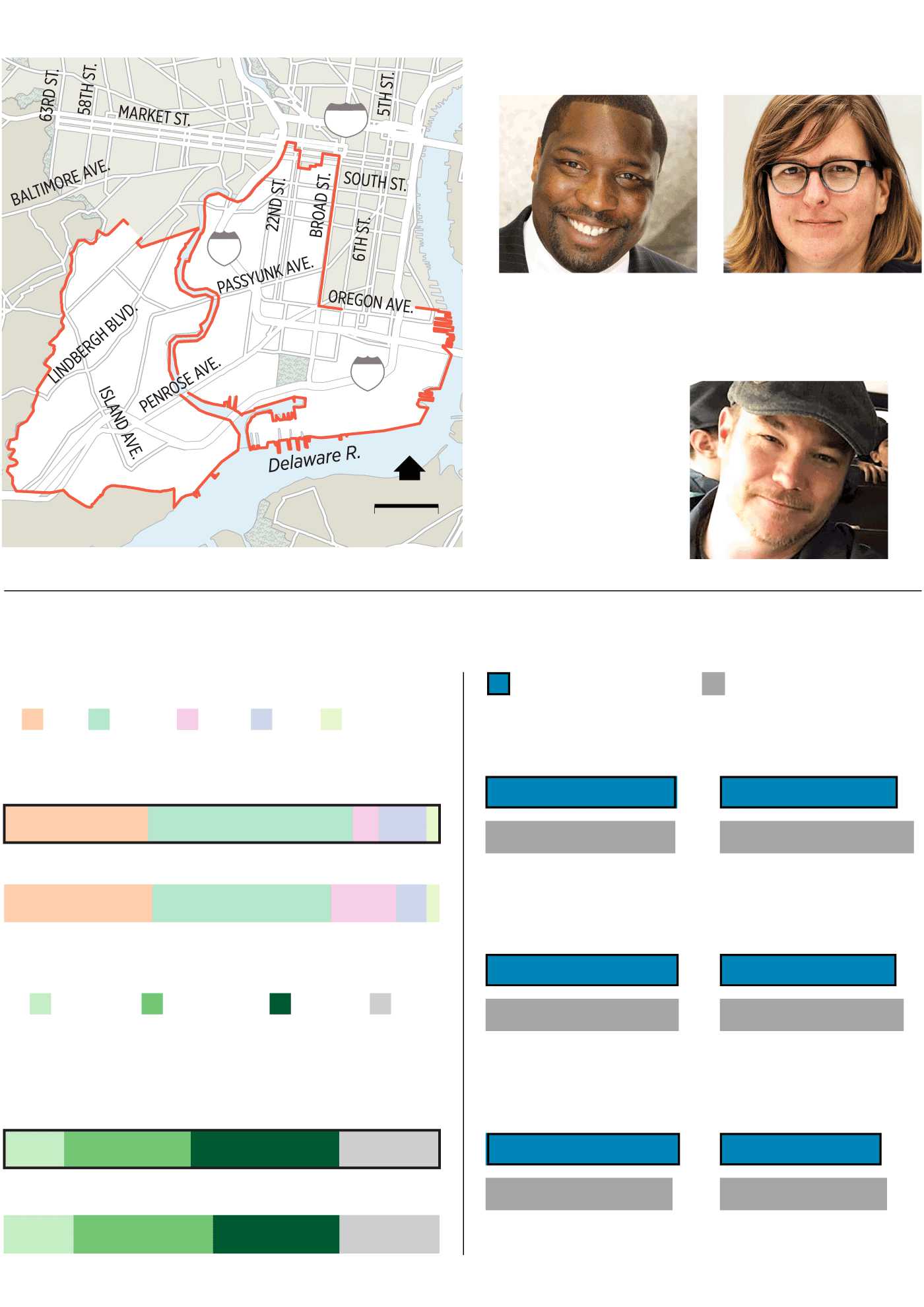 Second District at a Glance

Second District at a Glance

Vidas, 38, worked as a legislative aide to former Councilman Bill Green. She was part of the legal team that successfully sued Mayor Michael Nutter’s administrator over the decision to close 11 libraries during the recession — and she then went to work for Nutter’s finance director. She spent several years as a lobbyist with her father, Ed Hazzouri, and served on Mayor Jim Kenney’s policy and transition team. Most recently she’s been a lobbyist for the firm PFM.

If elected, she’d be the youngest district Council member — Johnson is the body’s youngest member at 45 — and its first openly gay member.

She says she’d introduce legislation to limit developers’ donations to Council members in the districts where they build. Vidas also favors giving the Philadelphia Inspector General’s Office the power to investigate Council. (The office’s jurisdiction extends only to administration agencies.)

On development, Vidas, a former Kenney appointee to the board of the Land Bank, a quasi-government body set up to re-purpose vacant city land, said she’s concerned with how those parcels languish while waiting for district Council members to sign off on how they will be used.

“That just blew my mind,” Vidas said. “That we were making these important and incredibly expensive decisions for the city based not on input from planning professionals but based on the input of” individual Council members.

Vidas criticizes Johnson’s ambivalence toward increasing commercial zoning on Washington and Point Breeze Avenues, where development has been stagnant.

Johnson defends the slow pace of construction there as an anti-gentrification move. “I believe we have to be strategic and methodical without stopping progress, but I think incremental progress is still progress,” he said.

Addressing an Inquirer story highlighting one of the land deals that brought him scrutiny, Johnson defended helping a friend, Felton Hayman, secure the cheap purchase of three city-owned parcels, later sold for a huge profit. Johnson said he didn’t know there were other developers interested, blaming a clerical error. He said the city needs a more transparent system for people to declare interest in properties and deed requirements that hold developers accountable.

But Johnson also said giving more opportunities to people from the neighborhood — including people like Hayman, who got into development after serving 15 years in prison for third-degree murder — is part of the job.

“He’s competing with other developers who own — at least in Point Breeze — close to 500 properties, [each worth] about $600,000," Johnson said. "So how do you compete? I understand the market will move forward, but as agents of government we have to make sure that the process is fair to everyone.”

On Wednesday, about 150 people packed an upstairs meeting room of the Tenth Presbyterian Church in Center City to hear Johnson and Vidas debate. Both said they support keeping the sweetened beverage tax, reforming the 10-year tax abatement, and at least a partial moratorium on charter schools. Vidas is for term limits and finding ways to curb councilmanic prerogative. Johnson opposes both.

Defeating an incumbent is historically difficult in Philadelphia. Johnson has more money — about $520,000 cash on hand as of an unofficial April 1 tally, compared with Vidas’ $70,000. He has party backing, the endorsement of the mayor and Democrats in two wards that endorsed Feibush in 2015. Ward support can help get lesser-known candidates’ names in front of voters through sample ballots at the polls.

“It’s a very, very heavy lift to be able to defeat an incumbent,” said Feibush, who lost by nearly a 2-1 ratio. "I’m absolutely voting for Lauren, but I don’t see her taking the necessary steps to do it. There’s just no way to educate voters if you don’t have ward support or if you’re not spending enormous dollars. I obviously spent huge dollars and had some ward support, and it didn’t matter.”