A Horn & Hardart coffee can, which has two Twitter accounts, is possibly the most powerful factor in Philadelphia municipal elections.

This is the coffee can of destiny.

It helps decide who runs the city.

Every local primary election, Philadelphia candidates pick a number from the Horn & Hardart can to determine where they appear on the ballot. Pull the right number and enjoy a boost in votes; pull the wrong number and face a steeper climb to victory — and maybe wind up in the dustbin of history?

An inanimate celebrity in Philadelphia politics, the coffee can is meant to bring randomness, and thus fairness, to the ballot design.

The concern: How candidates are listed on the ballot influences voters, especially in low-information races with many candidates, such as judicial races. (Judicial candidates’ ballot positions are decided through a similar method in Harrisburg.)

This year, 34 people are vying for seven available City Council at-large seats, the most since 1983. Forty-three candidates filed to run for seven open judicial seats.

State law has required random drawing of lots to determine ballot order for decades. Technology now makes it possible to vary the order across different ballots, but Pennsylvania, even with new voting machines coming, has made no major move to change its process.

“It’s pretty much incontrovertible that you have an advantage if you come first. Just flat-out,” said Monika McDermott, a political scientist at Fordham University.

In lower-information races in which lots of candidates run, it’s even more important. That’s for two reasons, said Jon Krosnik, a Stanford University professor who has studied ballot position: “Some voters walk into the voter booth feeling deeply conflicted and uncertain — and the order of candidate names is a subtle, unconscious nudge.”

Other voters are committed to casting a ballot but, knowing little about the candidates, select the first names they see.

The Power of a Favorable Ballot Position

In the 2017 Democratic primary for the Court of Common Pleas, Philadelphia voters were asked to choose nine candidates from a ballot of 27 names, arranged in three columns. Six of the winners were in the first column, and the first two names in that column received the most votes. Only one winner was in the last column. 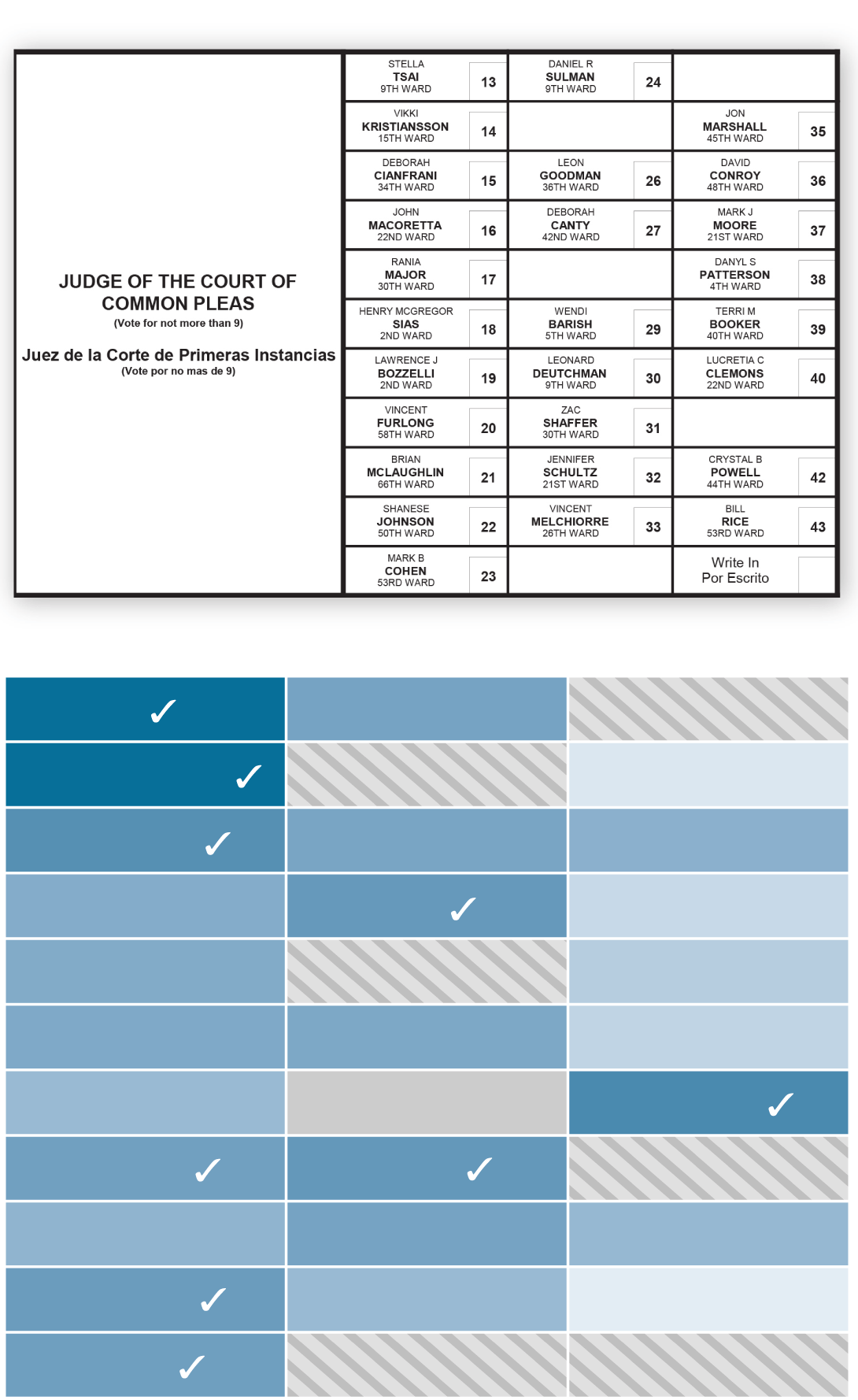 Ballot for the 2017 Democratic primary for Common Pleas Court

Percent of the vote arranged by ballot position

Ballot for the 2017 Democratic

Percent of the vote arranged

This is even more pronounced in primaries, in which party isn’t a factor.

Former City Councilman Wilson Goode Jr. was running for his sixth term when he pulled the last spot in 2015. He’d also pulled last in 2011 and won — but didn’t survive the second time around, which he partly blames on ballot configuration.

Even his advantage in name recognition — as a longtime councilman and the son of a mayor — fell victim to the matrix, he believes: “If they’ve used up their votes before they get to you, it doesn’t make a difference what your name is.”

You can tell the importance of ballot position by the reactions on lottery day. Over the years, candidates have pulled balls out of a bingo cage, tiny discs from an old mail bag, and coat-check tags from a Folgers coffee can, drawing cheers, applause, or groans from the gathered crowds. In 1999, longshot Democratic at-large Council candidate Curtis McAllister whooped and yelled, “Jesus!” when he nabbed the top spot. In 2007, Debbie Mahler, chief of staff to then-Councilman Jim Kenney, kissed the hand of an election official after drawing No. 1 in a crowded race.

“It’s extremely nerve-racking,” said two-time Council hopeful Isaiah Thomas, who is running again and hoping for better luck at the March 20 drawing at City Hall. “You have no control over it.”

Ballot order is particularly consequential in judicial races: Voters show up to pick mayoral and City Council candidates, then are asked to pick multiple would-be judges from a pool of, often, dozens.

“The problem I have with the lottery: I come out of law school one week, I pick Number One, I’m a judge. That’s an important job,” Brady said. “You can put people in jail.”

“We are hopeful that in the future we can participate in a process to change the election code to neutralize the impact of ballot position,” said Rochelle M. Fedullo, who heads the association.

A study by Econsult Solutions of judicial elections from 2009 to 2015 found that candidates running in Philadelphia benefited more from a position in the first column of the ballot than from having the endorsement of the Democratic Party, The Inquirer, or the bar association.

In judicial races, few factors can overcome a bad ballot position, said Anthony Kyriakakis, who is running again to be a Common Pleas Court judge after dropping out in 2017 due in large part to having drawn position 47 out of 48.

“That was devastating to my campaign,” he said.

Ballot-position effect is so well-known, he said, that a bad number hurts a candidate’s chance at endorsements; a campaign with a high number is seen as less viable.

Pennsylvania is one of just a few states with partisan elections for all state judges, including the state Supreme Court.

Ballot position is influential but not always determinative, especially for Council races in which money, name recognition, and party backing also matter.

Take Thomas, who drew the No. 2 spot in 2011, but with a bare-bones campaign still lost. In 2015 he ran a much more robust race and received 45 percent more votes, but drew the second-to-last spot and lost again. He’s running again this year.

How to change the system — if you dare

There’s a reason for the coffee can: It’s better than a lot of alternatives.

All candidates have an equal chance to draw the top spots, making it better than listing candidates alphabetically or allowing a controlling party to decide, as happens in New Jersey primaries.

Still, elections could be even fairer if each of the city’s 1,692 precincts had a different ballot order, giving all candidates random chances to be listed first.

Or, better yet, the candidates could be randomly rearranged for every voter. The new voting machines being purchased by Philadelphia — a process dogged by criticism — likely could be programmed to do just that, said Lisa Deeley, chair of the city commissioners and herself a candidate for reelection.

But it’s not technology that gives the coffee can of destiny its power — it’s the law.

The state election code calls for a ballot lottery and says that once lots are drawn the county commissioner must create “the ballot,” singular.

Harrisburg doesn’t have much appetite for changing the election code. Part of that is party distrust. Democrats figure the GOP might slip Voter ID requirements in. Republicans fear Democrats might try something like automatic voter registration.

State Sen. Mike Folmer (R., Lebanon), who chairs the state government committee, wants to make some changes in the election code, but said he understands the concerns. But for lawmakers, “that’s just an excuse not to change the status quo” that elected them, he said.

Folmer said he had never considered the effect of ballot order. Smaller counties don’t see the same numbers of candidates, so it’s less of a problem there.

So for now, the coffee can reigns in Philadelphia.

Jonathan Lai
I cover voting and elections as The Inquirer’s Data & Democracy reporter. I also lead a data journalism team as Editor of Data-Driven Storytelling.