The competition began crisply with the hoppy smack of some good clean lagers.

Five hours of sipping and nearly 80 beers later, with aromatic ales, big imperial stouts, and hazy hop bombs circling the tasting table, the situation had grown more complicated. There was a complete deadlock for the first time ever at the Inquirer's annual Brewvitational competition for local craft beers, with two completely different styles of brews vying for the top new-beer prize, a bretty saison and a roasty Belgian-style dubbel. One of last year's judges suddenly reappeared and attempted (but failed) to tip the balance. Then one of this year's panelists began pounding the table stadium-style in an effort to sway his colleagues toward a definitive result.

"These beers are so different," said the panel's guest out-of-town brewer, Scott Vaccaro of Capt. Lawrence Brewing in New York. "How do you say which one is better?"

He cupped his hands around the saison marked #77 and then deeply inhaled its tart and funky aroma.

Hey, whoever said being a beer judge was easy has not experienced the task of sipping (and spitting, mostly) through five flights of anonymous beers over the course of an afternoon while needing to remain lucid. I recruited a dozen outstanding panelists from all corners of the beer industry, from brewers to a legendary craft beer distributor, consultants, and journalists — all of whom were savvy pros.  But the challenge was greater than ever this year. We had the the biggest field so far for the Brewvi's eighth edition, with 79 entries from 41 breweries presented in two categories — best new beer and lager styles — presented in a blind tasting to the judges. 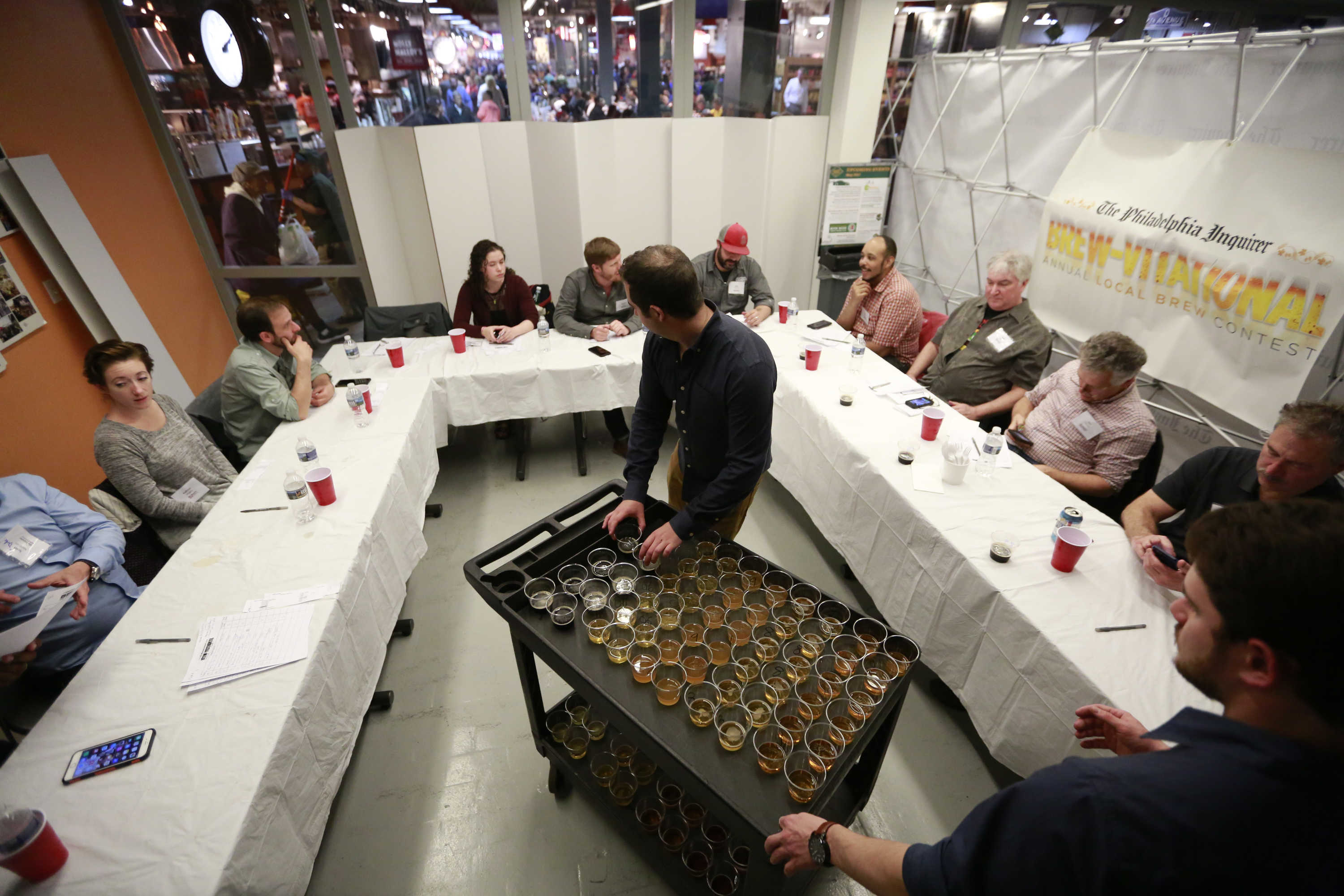 That was followed by a first-ever public event, Taste of the Brewvitational at the Reading Terminal Market that evening, where hundreds of attendees had the opportunity to sip 37 beers and vote for their favorite "flagship" beer, the year-round favorites that are  breweries' signature brands.

At the private competition, the region's great lager tradition was celebrated with a host of impressive pilsners, malty Vienna lagers, maibocks, and hoppier modern American takes. And perhaps even more notably, a new local craft beer star was launched as Kensington's Saint Benjamin Brewing Co. did something unprecedented in Brewvi history — sweeping first place in both categories with its Pilsner Prosim and Franklin's Abbey Dubbel … albeit with a tie for that dubbel as best new beer with the Antebellum saison from Ambler's Forest & Main.

Together, they illustrated the dramatic leaps forward a new brewery can take within just a few years of opening, a phenomenon this competition has demonstrated before. For the five-year-old Forest & Main, which has placed in the Brewvi before but never won, achieving this kind of barrel-aged saison, with its elusive balance of earthy edge and ethereal elegance swirling in a complex wave of tartness, funk, and grassy herbal notes, is the long result of trial and error. The process of harvesting wild yeast each spring from the cherry blossoms that bloom in the brewery's front yard is part of a continued quest to imprint genuine terroir in its beers.

For three-year-old Saint Benjamin, meanwhile, founder Tim Patton says the major improvement came from both the maturing of his staff (with brewer Andrew Foss) and the replacement last year of their "glorified homebrew system" with serious equipment made in Germany.

"We're not just running around crazy like we did the first few years when we were short-staffed," Patton says. "And now I've given Andrew a lot of autonomy in the brew house."

Perennial Brewvitational star Tired Hands took home another Tiffany crystal Brewvi stein with its third-place new beer, Refreshing Double IPA,  a hop bomb full of fruity notes and a yeasty haze that's typical of the New England-style IPAs that are the current rage (though Tired Hands was leaving its IPAs unfiltered before it became popular) Like F&M's Antebellum, it was also made with 100 percent oats in its mash, which may mark a mini-trend for the grain that brewers like, in part, for its creamy texture.

If one looks a little deeper into the results past the top winners to the slightly larger groups of 10 finalists in each category, a few other new breweries clearly appear to be about to make their move. The fast-expanding Conshohocken Brewing Co. landed finalists in all three categories — Conshopfen Huell Melon Helles (lager), Life Coach Session IPA (new), and Type A IPA (2nd-place flagship). At only three months old, Second District Brewing Co. in Point Breeze landed the fourth-place finalist spot with Bancroft, its Mosaic-hopped house pale ale. Pennsauken's Double Nickel Brewing Co., a prize-winner last year with its Vienna-style lager, showed consistency. A completely different panel of judges put the same beer in this year's lager finals. It also took top prize this year with the public, in the vote for best flagship at the Reading Terminal event.

The extra category focus on lagers this year was timely, as it's proved  one of the fastest-growing categories within the maturing craft beer movement. According to Bart Watson, chief economist at  the Brewers Association trade group, pilsners in particular, with their strong hop profile, have become a particularly popular alternative for brewers trying to offer an alternative to the India pale ale craze. A sub-category of maltier "Mexican-style lagers" is also noticeable, with at least two represented in the Brewvitational tasting.

"You keep on putting bigger and bigger and bigger [IPA flavors] on your tongue and then you realize bigger isn't always better," said Brewvi judge Edward Friedland, the third-generation beer distributor who introduced brands like Victory, Sierra Nevada, Dogfish Head, and Chimay to the Philadelphia market.  "The difficulty factor in brewing a good lager is also harder than making a pale ale."

Our region's German roots make us predisposed to the style, which ferments at colder temperatures than ales and take at least twice as long to make. Bavarian John Wagner brewed America's first lager in 1840 in what is now Northern Liberties. Several of the area's craft beer pioneers — Stoudts, Victory, Troegs, and Sly Fox — were making lager styles more than 20 years ago, when the West Coast was all about hyper hops. Beers from two of those veterans, Stoudts Blonde Double Maibock and Troegs Sunshine Pils, finished fourth and fifth, respectively.

But the top-three lager winners were particularly notable for a few reasons. For the first time, an entire Brewvi category was swept by Philadelphia breweries — Saint Benjamin's pilsner, Manayunk Brewing Co. (the Weekender), and Fishtown's new Evil Genius (It's Raining Cats & Dogs! FALSE) —  a reflection of revitalized activity in the city for an industry that's long been suburban-dominated.

Both Manayunk and Evil Genius brought unconventional approaches to their lagers, treating them with the large doses of exotic hops more associated with IPAs. It was a point of controversy for the judges, who debated whether beers should be praised or penalized for being off classic style.

"This is not the best lager," said judge Scott "the Dude" Morrison, a longtime local brewer holding #19, a.k.a. the Weekender "hoppy pilsner" from Manayunk Brewing. "But it's the best beer on the table." 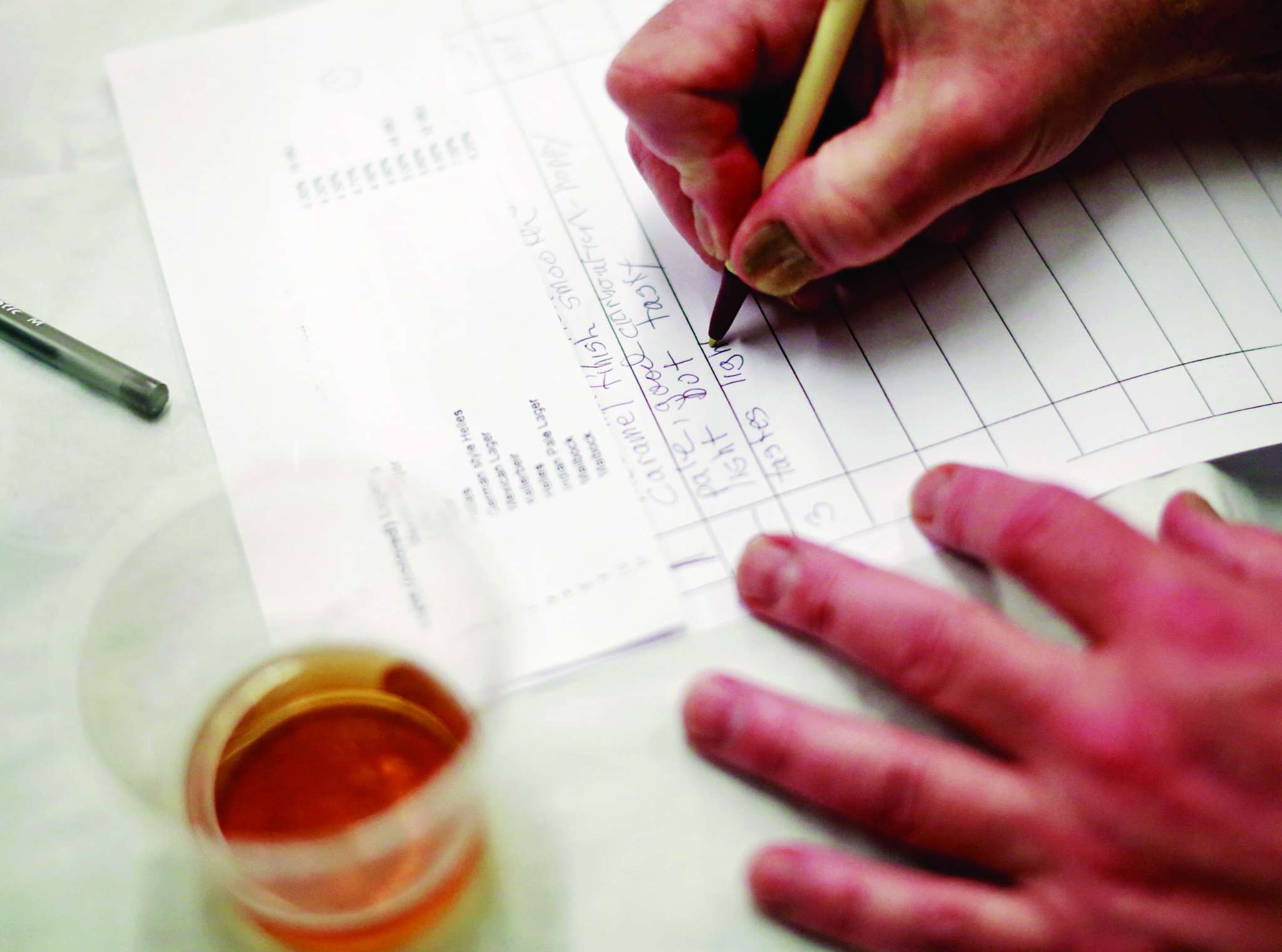 The new-beer category, meanwhile, remained perfectly deadlocked, with Saint Benjamin's dubbel and Forest & Main's saison tallying the exact same number of first-, second-, and third-place votes. One of last year's judges, former Inquirer food columnist Rick Nichols, made a last-minute guest appearance, and, in his trademark dramatic fashion, attempted to settle it all with two sips. But before he could pronounce a winner, judge Beth MacKenzie wouldn't hear it.  We'd come too far, and sipped too many cups, to deny these two great beers their due.

"Let them go back and rebrew it and we'll taste the next batch someday in the future," Friedland said. "Today is a testament to two breweries."

Actually, the 2017 Brewvitational was a testament to a region of distinctive and creative breweries that gets better every year.

What's up in Philadelphia's food world this week? We have you covered in our new food newsletter, which answers your burning (and simmering) questions: Where should I eat? Where are the new restaurants? Where should I drink? Where are the best values? SIGN UP NOW to reserve your seat at the table.