A grassroots group with a direct link to the 19th-century people who knew and loved the poet and his work has been pursuing its vision of making the house where he died into the centerpiece of a public attraction.

Walt Whitman once happily described himself as grateful for being "left over in Camden."

Happily, or perhaps, miraculously, a portion of the block where this great American poet lived and died has somehow survived the decades of disinvestment, decay, and demolition that have eviscerated far too much of the city's heart.

You could say Whitman's home and three adjoining houses built in the mid-19th century on the south side of the 300 block of what is now Martin Luther King Boulevard have been "left over in Camden."

That's something anyone who cares about the city, Whitman, poetry, or American cultural history can be grateful for.

“The city has lost so much of its architecture,” said Leo Blake, curator of the Walt Whitman House, a National Historic Landmark. “But these buildings are still here.” 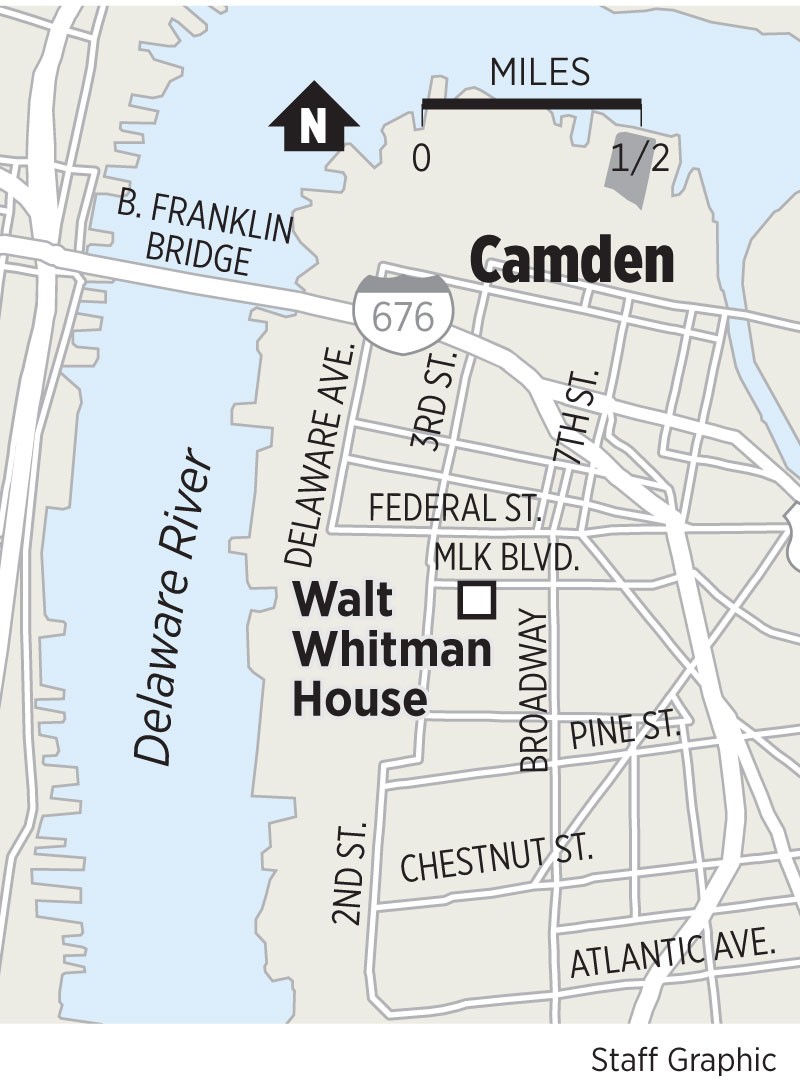 Soon, after decades of public and private efforts — I first wrote about a Whitman-themed park plan in 1990 — restoration of the houses on either side of the poet's residence will begin.

An $895,730 contract for design work was awarded July 6 by the state Department of Environmental Protection, which owns all four structures.

"The historical, literary, and architectural jewel of Camden" is how Walt Whitman Association board member John McPeak described them.

The all-volunteer association traces its lineage to friends and fans who knew and supported Whitman and his work during his lifetime. The organization has tended the poet's flame in Camden for 100 years, encouraging Whitman studies and promoting the house.

And through several gubernatorial administrations and several setbacks, the association diligently lobbied for the "Whitman's neighborhood" project.

The new plans call for the exteriors of the three houses, including the former home of noted architect Stephen Decatur Button at 332, to be restored to their original appearance.

The three interiors are to be repurposed as exhibit areas and other facilities for visitor and educational programs, as well as association and state park offices.

The Button house is in especially bad condition. Whitman's house at 330, long owned by the state, was beautifully restored in 1998, although the exterior could probably use repainting, in my observation.

"The project is exciting, and it's going to be marvelous" for visitors and for the city, said association president David Stedman, who taught elementary school in Camden for more than three decades.

Stedman and other project supporters hope the houses, now surrounded by empty lots and across from the Camden County Jail, will evoke some of the look and feel of the neighborhood Whitman knew, and perhaps attract more visitors as well.

With construction cranes all over downtown and a stretch of Market Street two blocks away seeing new investment, the timing may be right for Whitman's old neighborhood.

And in recent years, two other literary-themed facilities — the Writers House at Rutgers-Camden and the Nick Virgilio Writers House — have opened in Camden, where an influx of young techies, entrepreneurs, and artists has created a bit of a buzz, particularly downtown.

Annually about 4,000 scholars, students, and fans of Whitman from South Jersey, across the country, and around the world come to the little house on what in the poet's day was called Mickle Street.

The intimate atmosphere of the curated interior provides a sense of the poet's daily life or even his presence.

"It's as if Walt just stepped out for a moment and took a walk," Stedman said.

But the Whitman house itself is far too small to accommodate, say, a busload of tourists, or a flock of schoolchildren from the city. The cramped quarters also make it difficult to properly display artifacts, including those involved in his writing.

"He would write down apt phrases in a notebook and then cut and paste and move them around," Stedman said. "He was constantly revising. You can see how the poems changed."

Whitman continues to inspire reverence, as well as controversy.

He abhorred slavery, venerated Abraham Lincoln, and exalted the common folk, but his attitudes toward African Americans were not exactly enlightened. And while he surely was not openly gay, Whitman's homoerotic musings and friendships with young men continue to fuel speculation about his sexual orientation.

But the Good Gray Poet with the Santa Claus beard does seem to have cared deeply about Camden.

He moved to the city in 1873 to live with his brother George on Stevens Street — the house was demolished for no good reason in the 1990s — and bought the Mickle Street house in 1884.

He died in 1892 in the only house he ever owned, and, after a funeral that drew 4,000 mourners, was laid to rest at Harleigh Cemetery in a tomb of his own design.

So what if his famous phrase "In a dream I saw a city invincible," majestically chiseled onto the southern facade of City Hall and more recently adopted as something of an unofficial slogan, is not specific to Camden at all?

Whitman's quote about being "left over" in the city is quite specific, concluding that Camden "has brought me blessed returns."

Here's hoping the Whitman neighborhood project will do the same for the city America's poet loved.

Kevin Riordan
Since 2010, I've served as a columnist, editorial board member, and writer for the Upside, writing good news and uplifting stories.