Truth, nowadays, is like cellphones. We all have our own.

That's why it's gutsy and provocative to mount a show called "Truth & Vision: 21st Century Realism." This group show of about 40 works by 20 representational artists, mostly painters born between the 1930s and 1960s, is at the Delaware Art Museum through Jan. 22.

The show makes a case for realistic, carefully observed, and technically accomplished depiction in an era when everyone is carrying a camera and capturing and disseminating images with hardly a second thought. Indeed, we take so many pictures that we rarely pause to look carefully at what we have recorded. Though sometimes we Photoshop or add other effects, mostly to make ourselves look better. Truth doesn't seem to have too much to do with it.

This show, based on a book by artist Robert C. Jackson, in which he interviewed 19 artists he admired, along with himself, is more haphazard than definitive. Some artists are represented by only one work, and the information provided viewers is minimal. Still, it largely fulfills the promise of such a show - to encourage viewers to slow down, look more slowly and more carefully, and see how interesting the world is. It can make the familiar look strange, or the terrifying look all too familiar.

You can walk into New York's Grand Central Terminal and shoot a picture from the same point of view as the painter Stone Roberts chose for his large canvas, the centerpiece of the show. But while your quick snap is over in a flash, Roberts spent three years. The snapshot simply shows us the place. Roberts had to understand it in all its particulars. 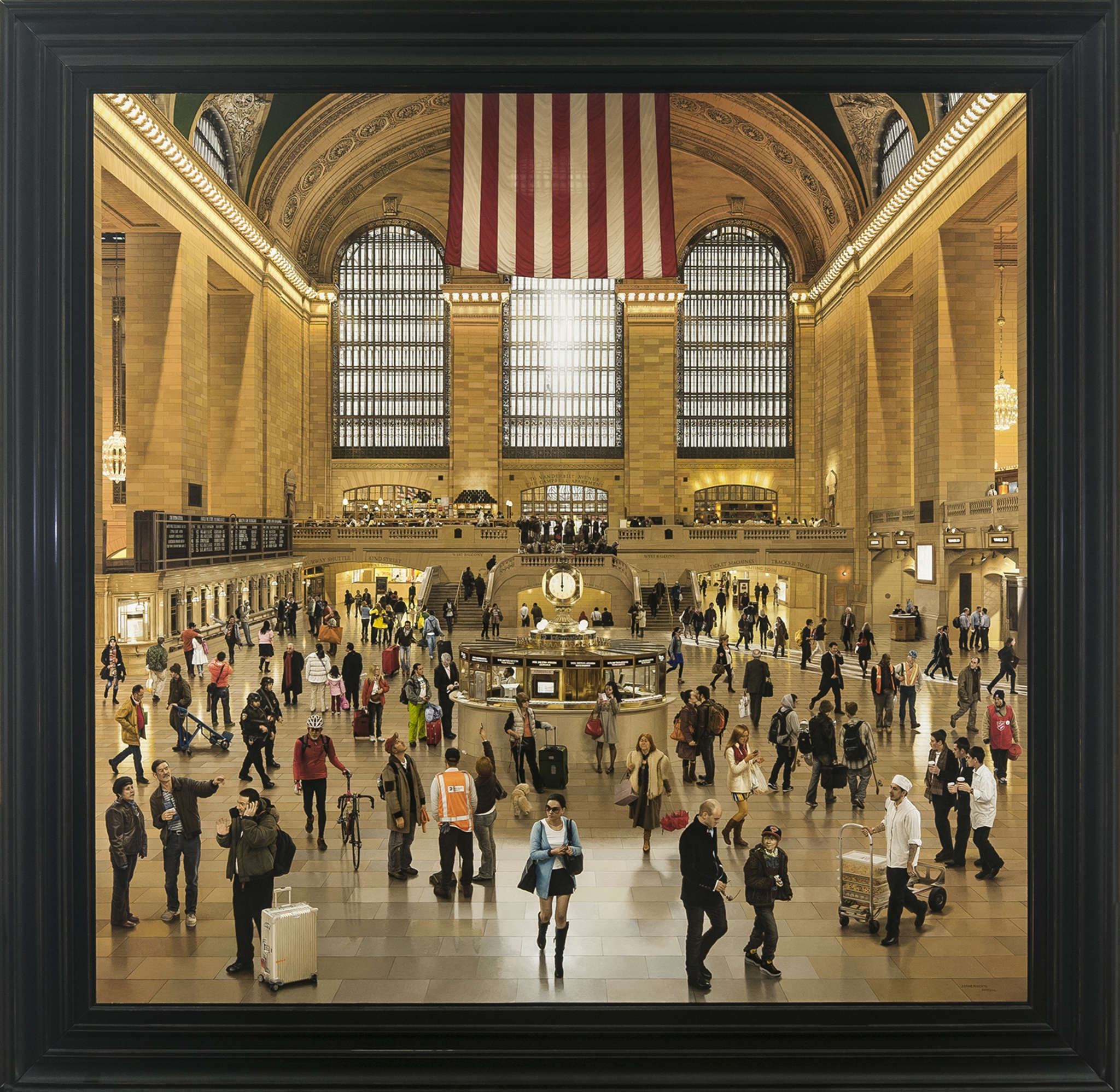 "Grand Central Terminal" by Stone Roberts
Things to Do Newsletter

The painting is titled Grand Central Terminal: An Early December Noon in the Main Concourse, which tells us the painting is about the quality of light at a particular hour and time of year. It also suggests how the hundreds of people in the painting are dressed, what they are carrying, where they might be going. Moreover, Roberts has worked to present all these figures, on different levels and distances, in the proper perspective. The painter spends a stupendous amount of what most of us rarely spare: attention.

Photography played an important role in this process; the painting would not have been possible without it. Roberts took more than 200 photographs of individuals, groups, and architectural features that he was able to combine and manipulate on his computer screen. Within the canvas are many smaller compositions, each of which makes a point about form, color, shape, social class, and casual interaction. In the end, though, if we can speak of the truth of this painting, it comes from the enormous amount of personal observation and judgment that went into its making. Such close scrutiny and focused execution brings its own moral weight.

For me, the painting falls short in that it does not express what to me is most memorable about places like Grand Central. That is the feeling of confluence in which each participant follows an individual course but still has the sense of being part of an exhilarating whole. The painting's many vignettes never cohere into an emotionally satisfying whole.

In some ways, an apple tree in full blossom can be as visually complex as Grand Central, as Woody Glynn's Manzano demonstrates. I grew up surrounded by apple orchards and spent a lot of time looking at the trees, but I know I never considered them as intently as the artist did. There is truth there. 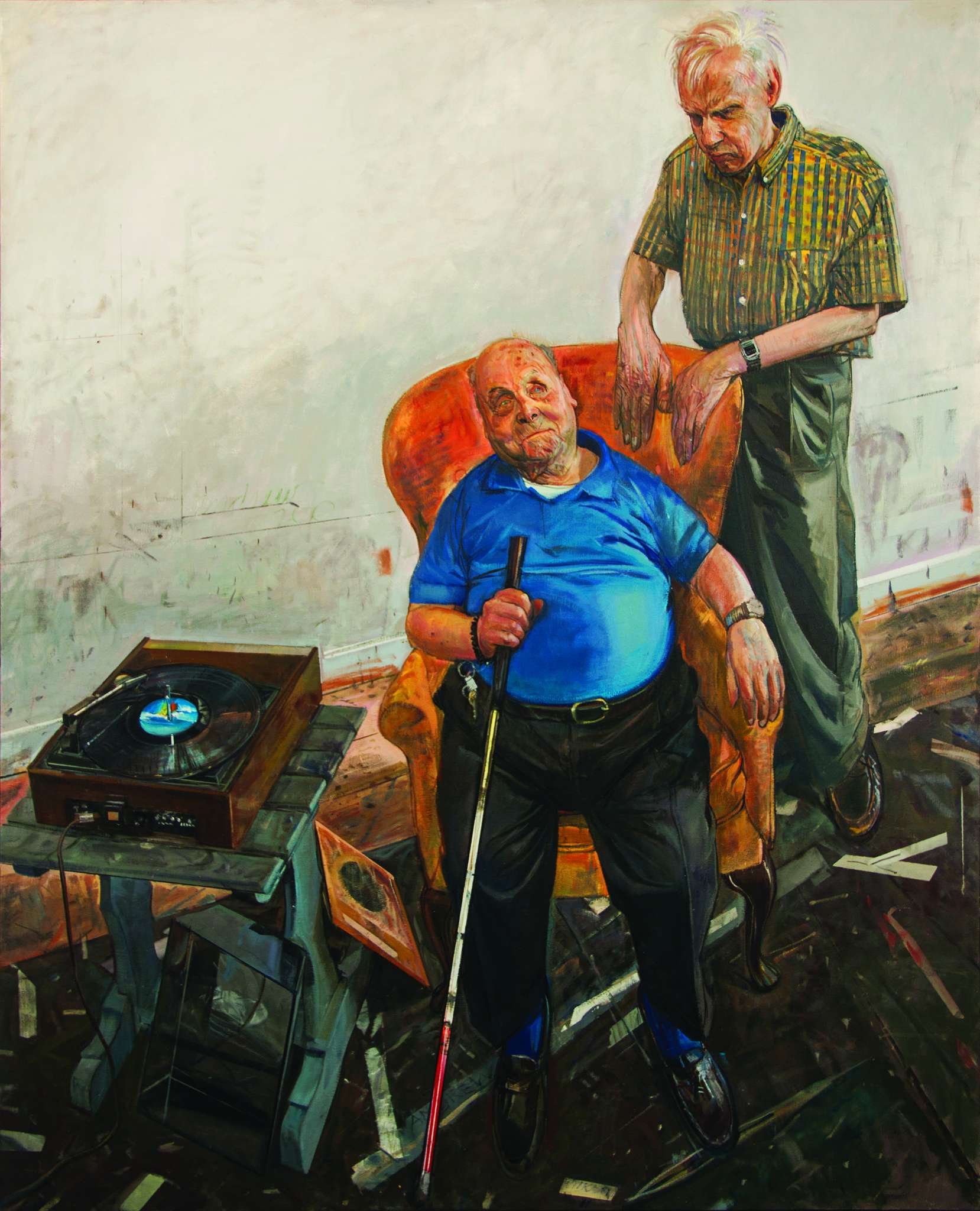 Jerome Witkin's Listening to Dave Brubeck: Bob Frye and Dick LaBonda is matter-of-fact, almost to the point of cruelty, in its depiction of two old men, one perhaps a bit gaga and the other seemingly angry or afraid. Yet the old music on the old phonograph brings them together and suggests a pleasure they feel together that belies the deterioration of their bodies. Their veiny hands are painted in great detail; the space they share is specific but slightly sketchy. The most important space in the painting is between their two sets of failing eyes.

The show is called "Truth & Vision," and many of the artists shown are most interested in evoking the uncanny. They deploy their observation, draftsmanship, and color skills to create unsettlingly convincing fantasies. Laurie Hogin creates mutant animal kingdoms full of Day-Glo alligators, striped turtles, and brilliantly plumed birds. Her aim is to provoke thought about how humans are making the natural world increasingly artificial. Amygdala Love and Poison Birds #2 (green cake), a small painting with a vibrantly colored finch and a toxic-looking piece of cake, gets its power from the cake's radioactively glowing green icing, a probable case of fatal confection.

Margaret Bowland's paintings, in which she uses live models, are at once highly specific and allegorical. Her painting White Fives shows a pre-adolescent African American girl with white makeup, a gown on which red paint has been spilled, and a great frizz of hair atop her head that the artist said the model made herself. She is in a glade with "roses" that are actually rolled-up five-dollar bills, which are in turn attached to barbed wire, which imprisons the girl. The painting, clearly about the onset of puberty, is mysterious precisely because it is so specific. 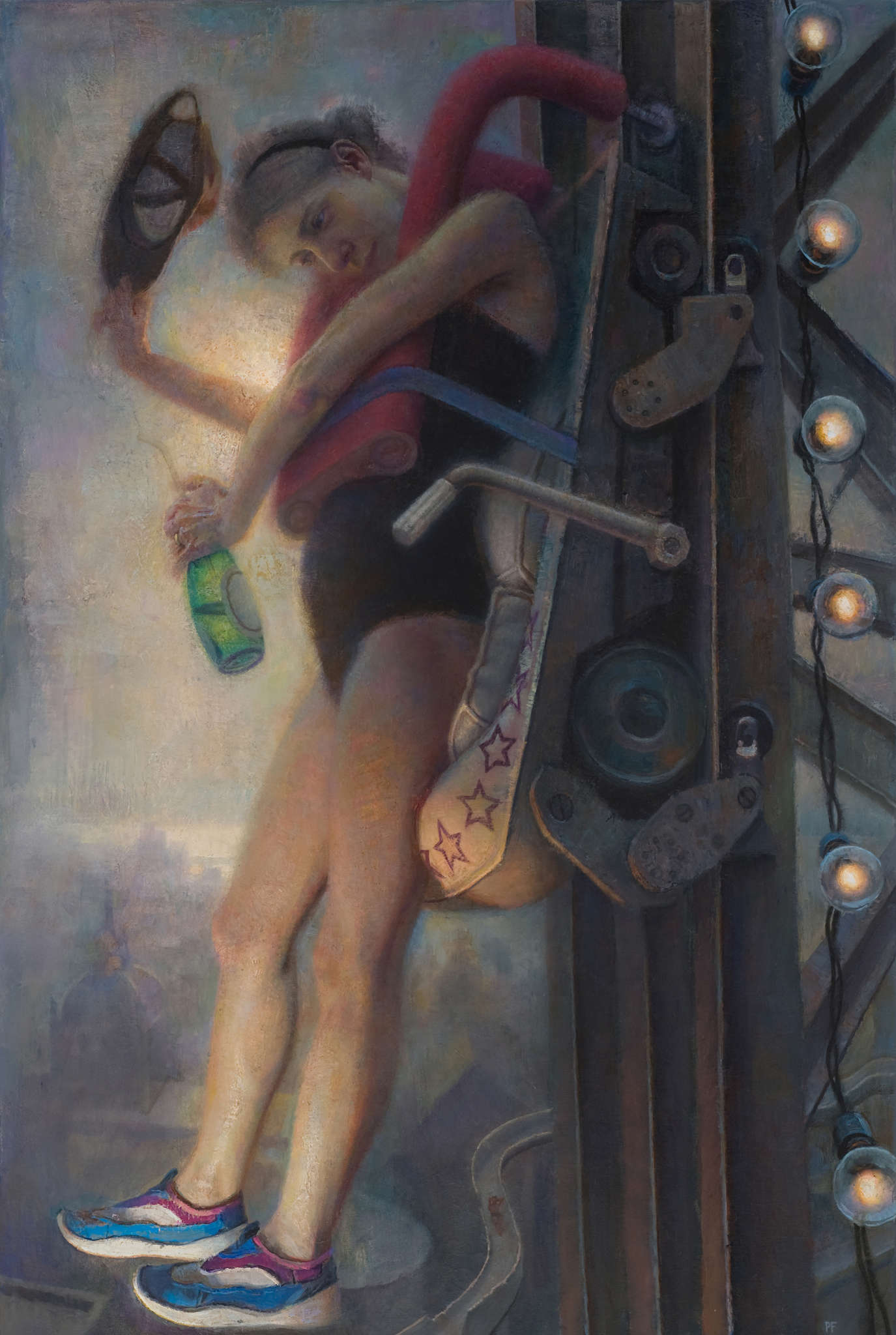 This girl has an older counterpart, perhaps, in the figure in Theme Park Patron by Paul Fenniak. The woman, wearing a bathing suit, with a bottle in one hand and a hat in the other, is strapped into a conveyor belt that will presumably take her to a thrilling experience. It looks scary, but her passive face suggests she is looking forward to some excitement.

There is enough here to suggest the need for a more comprehensive and seriously curated exhibition on this subject. It is good to find artists who have looked very carefully, and done the work.

Through Jan. 22 at the Delaware Art Museum, 2301 Kentmere Parkway, Wilmington.