Hotel rooms are sold out in Carbondale, Ill., early in the third week of August. Online merchants are doing a brisk business in safety eyeglasses. And scientists across the country are preparing to launch a flotilla of camera-equipped balloons miles into the sky.

For a couple of minutes on Aug. 21, the moon will totally block the sun along a 70-mile-wide path that spans the United States from Oregon to South Carolina. (The effect will last longest in fair Carbondale, population 26,179 – provided that the skies are, in fact, fair.)

The rest of the country, Philadelphia included, will get only a partial view of this celestial show. But the city boasts a rare piece of evidence that our fascination with eclipses dates back to ancient times.

It is a clay tablet from ancient Mesopotamia, from a site in what is now southern Iraq, with a line of five characters in the long-ago wedge-shaped script called cuneiform. They read as follows: 28, sun, sky, dark, withheld.

The tablet lies on a shelf at the University of Pennsylvania Museum of Archaeology and Anthropology. The five characters represent one of the oldest known records of astronomers predicting a solar eclipse.

"They're reading the heavens," said Philip Jones, associate curator and keeper for the museum's Babylonian section.

The exact age of the tablet is unknown. But modern scholars have verified that the eclipse in question did indeed occur on the date it was predicted: Oct. 23, 425 B.C., more than 2,400 years ago. (The tablet says 28, not 23, because the astronomers were on a different calendar, Jones said.)

This Mesopotamian tablet, found in the late 19th century by Penn archaeologists, contains five characters that predicted a solar eclipse that occurred on Oct. 23, 425 B.C. It is not known how far in advance the prediction was made. 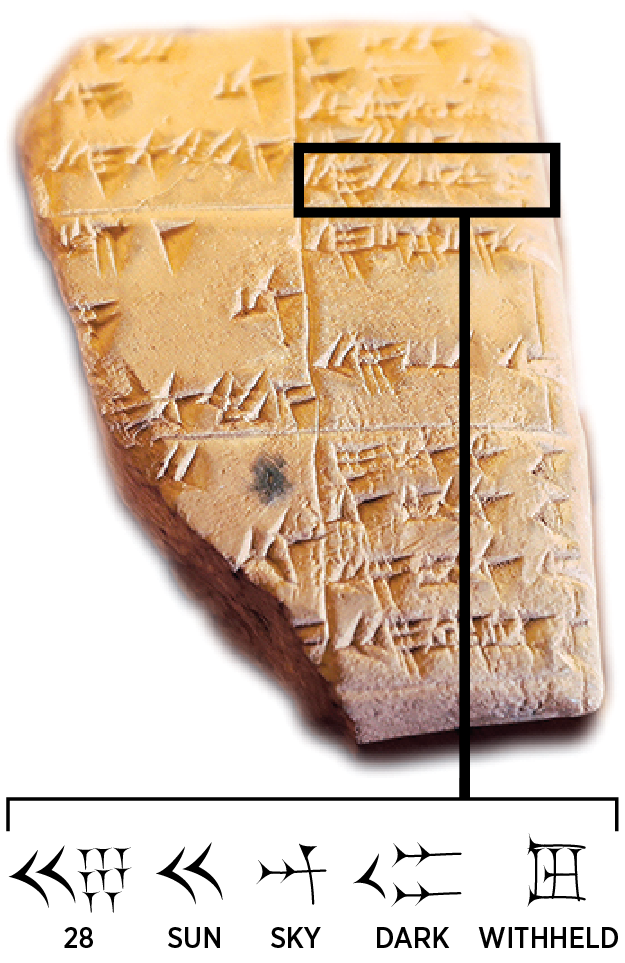 Ancient cultures around the world wove various elaborate myths to explain solar and lunar eclipses, invoking dragons, demons, and other fantastical creatures. Likewise, the people who inscribed the tablet in Penn's collection, known as Babylonians, engaged in sky-watching for the purpose of fortune-telling.

Yet they were scientists, as well, with an impressive aptitude in an era with no telescopes and satellites.

They learned to predict eclipses and other astronomical phenomenons purely through careful observation and record-keeping, said John M. Steele, a professor of Egyptology and Assyriology at Brown University.

Here is how it worked:

The Babylonians observed that a lunar month, the time from one full moon to the next, lasted 29.5 days.

They also saw that the moon's celestial latitude – its apparent "height" in the sky – varied on a cycle that lasted 27.5 days.

This is where it gets a bit confusing. If these two cycles start on a certain day, one ends two days before the other. The next time around, they are four days apart, and so on.

"When you go from one full moon to the next full moon, the moon is no longer at the same latitude," Steele said.

Likewise, the Babylonians apparently could not see the eclipse in 425 B.C., as signified by the word withheld on the tablet, pronounced etēqu in the original language, Akkadian. (Yes, even though the people were called Babylonians, in a region called Mesopotamia.)

Etēqu also can be translated as "passed by," Steele said. That could mean the eclipse occurred at night, or that its visible path occurred in some other part of the world, he said.

But wait, how come eclipses occur more often than every 18 years? That's because multiple 18-year eclipse cycles are underway at any given time, overlapping each other. A total solar eclipse is visible somewhere in the world every year or two, said John Bochanski, an assistant professor of physics at Rider University. Partial eclipses are even more common.

Now they do it with lasers

So it's all the more remarkable that the ancient astronomers could detect any sorts of patterns. But detect them they did, as chronicled in clay tablets that span hundreds of years, said Steele, who published a book in 2000 titled Observations and Predictions of Eclipse Times by Early Astronomers.

"It's completely unambiguous," he said.

The Babylonians had started to record the occurrence of eclipses as early as the mid-8th century B.C., and they seem to have figured out their periodic nature by about 600 B.C., Steele said.

"It is amazing that folks going back that far could figure it out," Rider's Bochanski said.

One riddle they could not solve was to determine the path where a solar eclipse would be visible.

Today, scientists have all manner of technology to get the job done, from high-tech telescopes to computers that calculate the gravitational pull between celestial bodies. NASA also can track the relative positions of Earth and moon to within a few centimeters by bouncing lasers off of reflectors that U.S. astronauts installed on the moon's surface, Bochanski said.

On Aug. 21, because of the moon's projected path and the way its shadow will hit the curved surface of the Earth, the spot where the eclipse will last longest just happens to be near Carbondale, in southern Illinois.

An even better view may come from above. The Montana Space Grant Consortium is leading a NASA-funded effort to launch dozens of helium-filled balloons mounted with video cameras, allowing the phenomenon to be streamed live on the agency's web site, nasa.gov. Viewers can watch the moon's shadow crawling slowly across the Earth's surface, along with footage of the blocked sun itself.

A warning: Wherever you are, do not look directly at the eclipse without proper eye protection.

NASA lists four manufacturers who certify that they make eclipse glasses or solar viewers with sufficient shielding from the sun's harmful rays, at eclipse2017.nasa.gov/safety. Regular sunglasses are not good enough to protect the retina.

From Philadelphia, the moon will block about three-quarters of the sun, like a big bite out of a cookie. It will still be fairly light.

"It's going to feel like, for a little while, that the sun is starting to set," Bochanski said. "You may think 'Oh, there's a cloud.' "

There will not be a total solar eclipse visible here until 2079.

But at least we've got that tablet.