How could the flames race so quickly through a modern facility protected by an extensive sprinkler system? And if that system was adequate, why was there little evidence that fleeing residents had been doused by the water that should have  rained from every ceiling to suppress the fire?

In the months since, the Inquirer and Daily News have reviewed the original blueprints, calculations sheets, and other records of the sprinkler network. The newspapers asked independent fire-suppression experts to assess the same documents. The papers' reporting suggests the sprinkler system may have been flawed in its very design.

These questions come on top of a previous charge by the Philadelphia law firm for one of the victims: that water to a large part of the sprinkler system may have been cut off by a closed valve even before the fire.

Investigators led by the U.S. Bureau of Alcohol, Tobacco, Firearms and Explosives have said little thus far about the fire other than noting their belief it began outside on an adjacent patio. An investigative report is expected to be released soon. The report is keenly awaited by fire-safety professionals nationwide.

"Whenever you have four fatalities in a sprinklered building, that gets our attention," said Robert E. Solomon, an engineer with the National Fire Protection Association (NFPA), the organization that drafts the nation's fire codes.

The last time so many people died in such a fire was in 2009, when four disabled residents of a sprinkler-protected group home in rural New York were killed. In that case, though, three of the victims, confused and unsupervised, actually walked back into the burning building.

The fire at Barclay Friends began about 10:45 p.m. on a cold and gusty night in the rear of personal-care section of the complex, a wing with 41 residents, four of whom had limited mobility. The five-alarm fire gutted the section. The six other wings, far less damaged, were home to some 100 residents receiving nursing care.

Firefighters, their voices captured on tape in urgent exchanges with dispatchers, repeatedly complained about a lack of water.  "There is no water pressure at all at the scene!" one is heard saying.

Aqua, the private water company that serves West Chester, had announced plans a few weeks before the fire to install a larger water main to serve the facility, in part to "improve firefighting capabilities in the area."  The work had yet to begin at the time of the fire.

It seems clear that sprinklers had done little, if anything, to slow the fire before firefighters got there.

Andrew Duffy, a lawyer with the Mongeluzzi firm, which represents the Malloy family, said that when investigators went through the home after the fire, they inspected the large, wheel-like valve that controlled the most extensive portion of the facility's sprinkler system. It was closed. If it was shut before the fire, no water would have been available to the 365 sprinklers that covered the basement and the first and second floors of the personal-care section.

Duffy said his firm was seeking to determine who, if anyone, might have had access to the valve after the fire to determine if it had been simply turned off post-blaze to shut down the sprinkler system.

Sprinkler systems typically have alerts, such as blinking lights or chirping sounds, to warn when the water has been turned off.

John H. Morley Jr., a licensed sprinkler contractor in Philadelphia, offered a possible explanation for a missed alarm. In his 40 years of  testing systems, Morley said, he often finds alarms not in working order. "It is very tricky and complicated to install and fitters don't have the patience," he said. As a result, he said, some fitters simply don't hook up the device or do it in a cursory way.

Morley had an even more ominous observation. In testing sprinkler systems, he said, he occasionally finds the water valve had been left off in error by the last testing crew.

When the 150-bed Barclay Friends home was built in 1997, its sprinkler system was drafted by Marco Inc., a fire-protection company in nearby Downingtown. The actual design work was subcontracted to Donald Vess,  who worked out of North Carolina. At the time, he had more than three decades of experience in his field.

In interviews last month from his current Tennessee office, Vess, now 75, said no one had contacted him as part of the current fire investigation. When asked about potential issues in his plans, he agreed that the documents show discrepancies in two areas.

One concerned the figure documenting the incoming water flow, a measure of the amount of water available to put out fires. The figure is typically supplied to designers by the area water company.

In Vess' design package, he and his staff put down two different figures for the water flow.

The blueprint for the sprinkler design for the personal-care section lists the water flow as 363 gallons per minute.  The blueprint was done by Wendy Vess, Vess' daughter-in-law.

But elsewhere, in page after page of calculations to determine the appropriate pipe sizes for an adequate system, Donald Vess used a different figure, one nearly double, 663 gallons per minute.

In interviews, the NFPA's Solomon and expert Kenneth Isman,  a fire-protection professor at the University of Maryland, and other experts said the discrepancy concerned them.

"One of the most critical pieces of information that is needed when designing a fire sprinkler system is the strength of the water supply," Isman said.  "The most unusual thing that I found while reviewing your material was the inconsistency in the reporting of the water flow test information."

He and others said it was  important to get the incoming water supply right because the calculation dictates how large the sprinkler pipes should be.

"If you assume the water is stronger than it really is, you're going to install pipes that are too small," Isman said. "If the pipes are too small, you're just not going to get as much water through them and less water is going to be put on the fire."

For that reason, he said, the borough and Marco "should both have seen that there was conflicting information. … The difference is important."

Unless the 663 gallons-per-minute figure was verified, Isman said, the "design would be in question."

While unable to explain the discrepancy two decades later, Vess said he believed he used the right figure for the calculations. "I'm not sure which one is correct, but I would assume it's the calculation sheets that are correct," he said. He no longer has records for that job, he said.

For one thing, Vess said, the smaller figure for water flow stuck him as simply too low for a water system for a town as large as West Chester.

"That's apparently a typo," he said of the lower figure used by his daughter-in-law in her design drawing.

Vess pointed out his plans and calculations were reviewed and approved by Donald J. Kohn, a licensed professional engineer with an office near Allentown. Kohn did not respond to telephone calls and a letter left at his office late last month.

Aqua, the water company in the area, declined to say whether the water flow at the time was 363 or 663 gallons per minute.

In the sprinkler drawing, there is an odd notation in the very center of the document.

In the blueprint for the personal-care wing of the facility, Marco listed the building code standards it would follow. For the sprinkler system, it listed two — NFPA 13 and the less stringent 13R, which permits the installation of fewer sprinklers.

Notably someone circled "13R" on the sketch and wrote next to it "Not permitted in I-1 use group?"  The words not permitted are underlined twice.  "I-1" was shorthand for Institutional/boarding homes.

Isman, the professor, and Solomon, the NFPA engineer, both agreed that the unknown commentator — whether designer or regulator — got it right in the scribbled note. The relaxed standard was not permitted at that time in personal-care facilities as large as Barclay Friends, they said.

At the same time, the two experts said they were not greatly troubled by the mix of standards. Isman said the long-term regulatory trend has been to permit fewer sprinklers in personal-care facilities, provided residents were mobile enough to flee a fire largely on their own. He noted Vess' design put more than 150 sprinklers in the attic of the personal-care wing — even though that was not required under the more lenient standard.

Morley, who analyzed the design documents, took a different view, saying the designers should not have deviated in any way from the building code.

He added that the design had "significant errors" that meant any fire at Barclay Friends "would most likely overwhelm the system."

In examining the plans, Morley also noted that Vess put down an incorrect figure at one point for water density, a measure of the amount of water a sprinkler network will produce over a set area. Again, Vess said it was a typo of no consequence.

Vess said his system, as designed, should have worked well.  "It should have protected the structure," he said.

Staff writer Mari A. Schaefer contributed to this article.

In one of the most deadly fires in years in a sprinkler-equipped building, four residents of the Barclay Friends senior citizens home died Nov. 16 in a five-alarm blaze there. 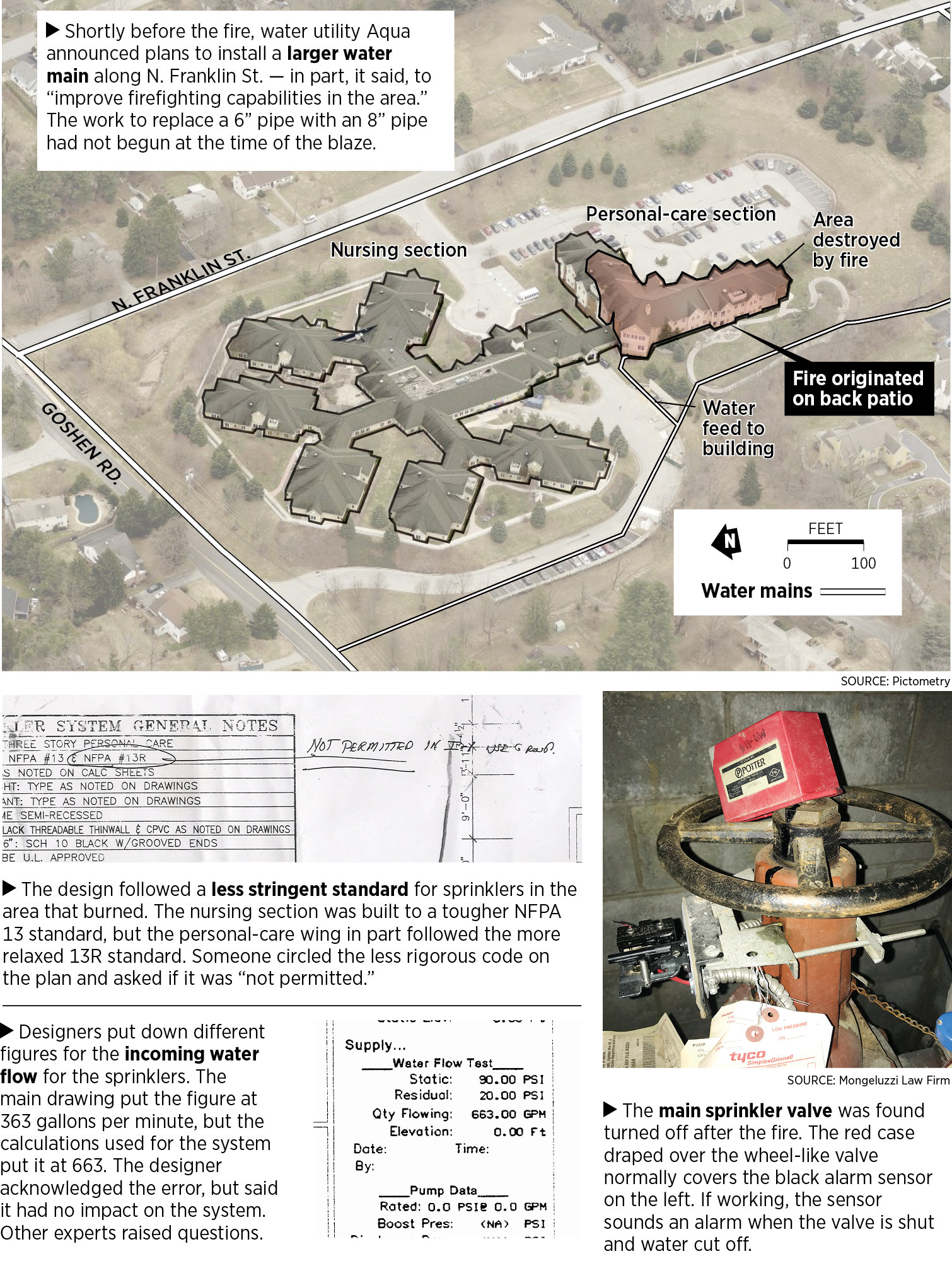