He survived Cambodia’s killing fields, only to be shot in West Philly by man with an AK-47

A West Philly beer deli owner is in critical but stable condition after being shot during an apparent robbery attempt outside his store May 5.

When a man with an AK-47 shot Mike Poeng outside his West Philadelphia beer deli last month, it was not Poeng's first encounter with a deadly assault-style rifle. He had come to the United States in 1981 with eight siblings, their mother, and a nephew — ethnic Chinese refugees from Cambodia's killing fields.

Poeng, 50, remains hospitalized in critical but stable condition. He was shot about 1:30 p.m. on May 5 while washing his used white Lexus outside his store, KCJ Inc. Police say the gunman tried to push Poeng into the store in an attempt to rob it while his wife and sons were inside. The store's outdoor surveillance video showed the man punching Poeng, who fought back — even spraying his attacker with his water hose — before he was shot in the right hip.

In interviews this month, his brother Thai Poeng, 57, a quiet man from a Buddhist family, said their lives have been upended by the shooting at 54th and Spruce Streets, for which no one has been arrested. "We want to make sure this AK-47 is off the street," he said. "We don't want to see anyone else suffer. We don't want anyone to have the same experience."

The annual banquet of the Asian American Licensed Beverage Association of Philadelphia, of which Mike Poeng is among the 245 members, was the next day. "We were all shocked by this tragic event," said Adam Xu, the chairman, who announced Poeng's shooting at the banquet at the Saigon Maxim restaurant in South Philadelphia.

"I think the shooting is another critical problem on top of others that is creating a lot of stress on the life and well-being of these Asian American merchants," said City Councilman David Oh, who attended the banquet — and who, like Xu, has been outspoken for the right of beer deli owners to protect themselves with interior bullet-resistant safety glass.

Poeng's story is another example of hardships faced by refugees and immigrants in Philadelphia. Police have said some Asian American store owners have been targeted because they are perceived as easy victims who may not report crimes due to language barriers or a mistrust of authority.

Lt. John Walker of Southwest Detectives said police are focused on a suspect but seek additional evidence and have not been able to interview Mike Poeng because of his condition.

Every morning, Thai and his brother's wife visit Mike at the hospital. Most nights, Thai returns there after work. He has visited as often as four times a day. The family has been helping to take care of Mike's wife and their three sons, ages 7, 9, and 12. Meanwhile, Mike's beer deli is closed.

Mike and Thai Poeng grew up in the northwestern Cambodian city of Battambang. Mike is the youngest of 11 kids, three siblings after Thai. After their father died in 1974, their mother continued to run their restaurant there. 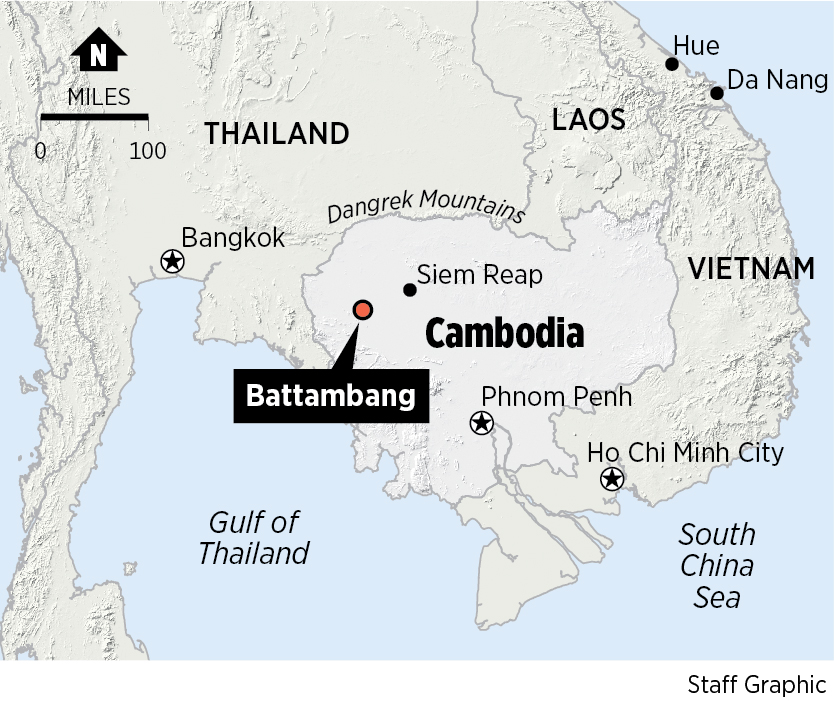 Soldiers forced the family from their home in April 1975, soon after the Communist Khmer Rouge captured the capital of Phnom Penh. “They stand in front with an AK-47,” said Thai. “They stand in front of the doors, waiting for you to hand in your keys, [saying] ‘Go, go, go, go!’ You just grab whatever you can get.” Mike was 7, Thai 13.

They spent the next four years in hard labor. Two older brothers likely were slain by the Khmer Rouge, Thai said. That period, 1975-79, is known as the time of the killing fields, when as many as two million people died of starvation and disease or were murdered under dictator Pol Pot.

After Vietnamese troops captured Phnom Penh in January 1979, the Poengs walked to the Thai border but were turned away by border guards who took them to the Dângrêk Mountains and forced them to return to Cambodia, Thai said.

The family trekked down a jungle mountain, and when they reached the valley, Thai said, they saw "body parts everywhere." After a month in Siem Reap, they returned to the Battambang area. Six months later, their mother decided they should head back to the Thai border.

One day at a border camp, the family witnessed Mike's toughness, his brother said.

Their youngest sibling had gone missing. Finally, at sunset, a malnourished Mike, 11, returned carrying a bag of rice on his head, his brother recalled. He had risked his life to walk into a Khmer Rouge camp for food for the family.

"We were crying, happy to see him with a bag of rice," Thai recalled nearly 40 years later. "He's a survivor."

Ultimately the family arrived in the U.S. as refugees and were resettled in Connecticut. Mike graduated from Sacred Heart University in Fairfield, Conn., his brother said. Their mother died in 1985.

In 1995, Thai moved to North Philadelphia, where his wife's relatives had a beer deli. About five years later, Mike moved in with his brother. Mike bought KCJ in 2012.

"He was doing really good with the community," Thai said, noting that his brother donated to the local police district at Christmas.

Both brothers have worked seven days a week, hoping to give their children better lives.

"We learn a lot from the suffering that we had during the killing fields," Thai said. "I didn't have a childhood. We want to make sure they have childhoods and get educated at the same time."

"We're Buddhist," he said. "We are peaceful people. We are not seeking any revenge."

Julie Shaw
I cover crime and courts, with a focus on Philadelphia and South Jersey.