Several people with ties to the Philadelphia region found themselves in the midst of the terror in Las Vegas on Sunday.

One was swept up in a crush of people running from the gunshots. Another opened her hotel room to strangers seeking higher ground. A third threw his body onto his children, willing to die if it meant they would not.

When a gunman opened fire on a country music concert in Las Vegas on Sunday night, Philadelphians who now call that city home or who were visiting for a few days of carefree leisure found themselves amid chaos. The massacre, which killed at least 59 people and wounded about 500, is now the most deadly shooting in modern American history.

"It was terrible," said 46-year-old William Ciancaglini, a Philadelphia lawyer who was in town on vacation and had enjoyed watching the Eagles beat the Chargers earlier in the day. "I was leisurely walking on the Las Vegas Strip. Ten seconds later, I was in a group of people running for their lives — including me."

Ciancaglini, who ran for Common Pleas Court judge in 2015, was a few blocks from the Mandalay Bay Resort & Casino when the sniper, identified by police as Stephen Paddock, opened fire on the audience during a performance by country singer Jason Aldean. Ciancaglini said he heard the gunshots — "pop, pop, pop" — and ran with the crowd.

As he tried to cross the street to his hotel, he watched cars speeding from the scene, some clipping pedestrians. Once back at his room, he stayed tuned to the television and watched  police lights flood the street below him.

Mike McGarry, a financial adviser from Philadelphia, told Reuters he was at the concert when the shooting started and shielded his adult children with his own body.

His shirt was covered in footprints from the people who ran over him trying to flee, McGarry told the news agency.

Lorraine Fidler, a Lyft driver, saw the crowd coming toward her as she approached Mandalay Bay. The 66-year-old Bucks County native, who moved to Las Vegas in 1995, had worked at Mandalay Bay for about four years earlier in her career. When driving for Lyft she often set up at the hotel, which is at the far southern end of the Strip.

On Sunday, she found herself spending most of the night driving customers on the northern part of the Strip, then headed to her normal spot when traffic there slowed.

"All [of a] sudden, everyone is running across the highway, screaming," she said. "I rolled down my window and I was like, 'What's going on?' Someone said, 'Shooter.' I could hear it. It was like bam, bam, bam, bam, bam. Lots of rounds."

She pulled into the driveway of the Luxor Hotel, next door to Mandalay Bay. A security guard told her to leave. But then she heard more shots. Fidler abandoned her car and ran into the hotel.

She spent the next eight hours on lockdown with a few hundred other people who had fled into the hotel, including a man and a woman who told her they'd been in the front row of the concert.

"I don't know how they got out of there," Fidler said. "She had skinned knees. She must have fallen."

Gina Candelaria, 36, of South Philadelphia, was also swept up by the fleeing crowd.

She was a few blocks from Mandalay Bay when the shooting started and made it back to Harrah's, where she was staying. When the elevator reached the 14th floor, Candelaria exited with five people, two of them elderly, who did not have a room at the hotel but were hoping to get to a high floor for safety.

Candelaria invited them to stay in her room.

"In a crisis like that, your first instinct is to help," said Candelaria, who works at Thomas Jefferson University Hospital and was vacationing in Las Vegas for the first time. "They kept thanking me over and over. I just did what I hope people would do for me, just what any human being would do."

Jonathan Shecter, who grew up in Center City and has lived in Las Vegas for about 15 years, watched what he could from the balcony of his condo, which is behind Mandalay Bay. He saw scores of people rushing onto I-15, followed by police cruisers and ambulances, followed by silence when the highway was shut down.

"It was a very eerie sight," he said.

Shecter, 49, who was one of the founders of the Source, a magazine that covers the hip-hop industry, has worked in the city's music scene for years, including six years as director of programming for the Wynn nightclubs. He said he and others in the industry have grown increasingly worried about the potential for such a shooting there.

"Vegas is a soft target. There's so many places," he said. "If somebody, sadly, if some deranged person wanted to do damage, there is really a lot of opportunity here to do that."

He said many nightclubs in recent years have increased security, but it's harder to secure outdoor venues such as the one next to Mandalay Bay.

"I guess what I've always feared is what happened," he said.

The chaos spread north from Mandalay Bay up the Strip, to the Cromwell Casino, where 37-year-old Jennifer Barkowitz of Philadelphia was with friends. In the bathroom, Barkowitz saw a young woman washing her feet, which were pierced with shards of glass.

"The one girl was hysterically crying," Barkowitz said. "She said, 'There were gunshots. We just ran.' "

Police shut down the Strip and Barkowitz and her friends were stuck in the casino for nearly four hours. She said people milled around, checking social media for news. Some kept gambling. Mostly, Barkowitz said, people just tried to stay calm.

"Everything was really normal until it wasn't," she said.

Others who were miles from the shooting were still shaken.

Billie Bakshi and her family moved from Abington to Las Vegas just last week — mostly to be closer to Serena DeJesus, Bakshi's daughter, a  mixed martial arts fighter who trains and lives in the area.

The family lives 15 minutes off the Strip, and everyone was asleep when the shooting happened, but it has everyone rattled and wondering how to help, Bakshi said.

Tom McCourt, who moved from Philadelphia to Las Vegas about two years ago, had the same idea and headed to a blood donation center first thing Monday morning. It took him more than an hour to get into the parking lot. And by 7 a.m. the center had more people in line than it could take donations from in one day, he said.

"I was pleasantly surprised to see there were hundreds and hundreds of people in line," he said.

McCourt made an appointment to return later in the week.

Deadliest Mass Shootings
In the U.S. 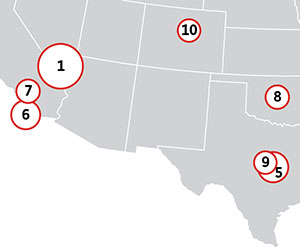 Click here for a graphic with details on the deadliest mass shootings in modern U.S. history.
Published