For DA-elect Krasner and FOP, an early thaw in relations?

Supporters planned a Thursday rally to lay out aspirations for Larry Krasner's first 100 days, while the police union - long critical of Krasner - said it stood ready to work with him.

Larry Krasner will become Philadelphia's 26th district attorney in eight weeks, and already his fans and foes may be switching places.

A progressive coalition of groups that supported Krasner plans to demonstrate Thursday morning outside the District Attorney's Office, laying out aspirations for the incoming prosecutor's first 100 days.

At the same time, Lodge 5 of the Fraternal Order of Police — the most strident anti-Krasner voice during the general election — said it is ready to work with the man whom the union previously declared unsuitable for the post.

"He's going to be on a learning curve," FOP president John McNesby said Wednesday. "We're not trying to make it harder for him."

The swift and perhaps surprising reactions signaled the start of life as an elected official for Krasner — a new reality for the career defense attorney who had never previously sought public office but who easily topped Republican nominee Beth Grossman on Tuesday for the job as city's top prosecutor.

Krasner was unavailable Wednesday; his campaign said he was headed to New York for a speaking engagement and then a family funeral. But the planned demonstration Thursday by members of grassroots organizations will address topics they discussed with Krasner during the campaign — including ending cash bail, increasing transparency, and changing the office's culture, according to Hannah Sassaman, one of the organizers.

"We're going to talk about what we think [Krasner] can get done," Sassaman said, emphasizing that she viewed the demonstration as a sign of support for Krasner and not a protest.

McNesby, meanwhile, said his union has no plans to "draw lines in the sand" once Krasner takes office in the first week of January.

That is a shift in tone from last month, when McNesby put out a letter to his union's 14,500 active and retired members imploring them to support Grossman, a career prosecutor, and knocking Krasner as having "an open hostility against police and law enforcement in general." 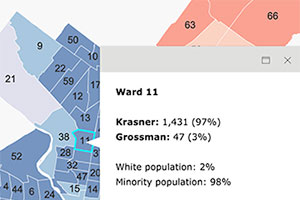 On Wednesday, McNesby shrugged off that language as pre-election talk.

"I'm not looking for a fight," McNesby said. "We're good at what we do. We're not looking to beat up anybody."

U.S. Rep. Robert Brady, chairman of the Democratic City Committee, brokered a meeting between Krasner and McNesby in May, after anti-police chants briefly broke out during Krasner's primary night victory party.

McNesby and Krasner emerged from that private meeting with nice things to say about each other, and the union then invited Krasner to address its members in an endorsement meeting. Ultimately it decided to back Grossman in the general election.

The new district attorney, who will be paid $175,000, inherits an office with 600 employees and a $54 million annual budget.

Krasner benefited from nearly $1.7 million that New York billionaire George Soros invested in an independent political action committee that aired television commercials supporting him before the May Democratic primary election.

Whitney Tymas, who ran that PAC, said Wednesday in an email: "We are proud of Larry Krasner's victory and wish him every success as he leads the District Attorney's Office with a focus on keeping the people of Philadelphia safe and making the city more just."

A majority of Grossman's support Tuesday came from wards in Northeast Philadelphia where many police officers live.

Brady on Wednesday said he would be happy to host another meeting between Krasner and McNesby if needed, though neither man has asked for it.

"The last meeting we had was really cordial, really friendly," Brady said. "It wasn't a shouting match."

Officer Eddie Lopez Sr., president of the city's Spanish American Law Enforcement Association, also had been critical of Krasner, but said Wednesday that although members still had concerns about his priorities, "he won and we'll give him a chance."

Grossman said Wednesday that she hopes Krasner has a "smooth transition" into office with interim District Attorney Kelley Hodge, who was selected for that post in July by the Philadelphia Common Pleas Court Board of Judges.

"There are good things that happen in that office, that have been going on," Grossman said. "I certainly hope Mr. Krasner will take that into account and not take a slash-and-burn approach."

David Rudovsky, a civil rights attorney, said one of Krasner's biggest challenges likely would be balancing the need to continue prosecuting violent crimes while also imposing reforms he promised during the campaign — including reducing the prison population, never seeking the death penalty, and ending civil asset forfeiture.

"I think his message has been that there's no inconsistency" between those ideas and proceeding with fair prosecutions, Rudovsky said.

That certainly was the message from Krasner's victory party Tuesday night.

Speaking to a crowd of raucous supporters, the district attorney-elect said: "This is what a movement looks like."

Chris Brennan
I write about politics at the federal, state, and local level. I also lead Clout, an often irreverent column on people, power, and politics.