For the last 12 years, Philly has continued to grow — even faster than its suburban neighbors — according to Census numbers revealed today for Pa. and N.J.

Philadelphia’s population grew slightly in 2018 for a 12th straight year of growth, according to Census Bureau estimates to be released Thursday, a streak that follows more than 30 years of mostly unbroken population losses that started in the 1970s.

Benjamin Gruswitz, senior planner at the Delaware Valley Regional Planning Commission, attributed the upward trend to several factors. In addition to an increase in the immigrant population and births outpacing deaths, he cited “an influx of people who want to live in higher-density places with walkable neighborhoods, short commutes to work, and access to transit and other amenities.”

The city reached a population peak of over 2 million in 1950, then proceeded to lose over a half-million residents over the next 56 years …


… but, starting in 2006, Philadelphia started to gain in population again, and in 2018 posted its 12th straight year of growth.

Change in population from the previous year

Nationwide, the counties with the highest numbers of new residents are in the South and the West. Of the country’s more than 3,100 counties, 55 percent gained residents between 2017 and 2018 and 44 percent lost residents. The populations of a dozen counties did not change.

Most of the counties with the highest rates of growth were concentrated in the West and South. Maricopa County in Arizona, home to Phoenix, topped all counties in numeric growth, adding over 81,000 new residents in one year.

The metropolitan area that includes Philadelphia, Camden, and Wilmington is the nation’s eighth most populous, with more than 6 million people. That region’s population increased by about 18,000 between 2017 and 2018.

Of the five metropolitan areas that lost residents this decade, the Pittsburgh region had the biggest drop.

The Philadelphia metropolitan area, which includes parts of Delaware and Maryland, grew in population by only 2.1 percent from 2010 to 2018, ranking 40th out of the 53 metro areas with 1 million or more residents. The Austin, Texas, metro area grew the fastest, by over 25 percent. Five metro areas lost population over that time, with Pittsburgh having the biggest drop.

No new metropolitan areas made it into the 10 most populous between 2017 and 2018, said Sandra Johnson, a demographer at the Census Bureau.

“One interesting trend we are seeing this year is that metro areas not among the most populous are ranked in the top 10 for population growth,” Johnson said in a statement.

The Philly region is growing, but that doesn’t mean people aren’t leaving

Among people relocating within the United States, more residents left four of the region’s counties — Philadelphia, Burlington, Camden, and Delaware — than moved into them between 2017 and 2018.

Graduate student Koya Perez, a lifelong resident of Germantown, plans to join them.

Perez is pursuing a master’s degree in writing studies at St. Joseph’s University while working at QVC in Chester County. But once she’s done with school, she wants out.

“I love Philly. I was born and raised here,” said Perez, 23. “For me, personally, I’m just ready for something new.”

She wants to travel and is open to moving anywhere, she said, but she likes the city life and would love to live in Los Angeles. Perez minored in fashion and apparel design while she earned her undergraduate degree in communications at Delaware State University.

"That was my first time ever seeing outside Philly. It really opened my eyes,” she said. “I want to see what else is out there, other people, other cultures.”

Every county in the Philadelphia area grew in population from 2017 to 2018, but in half of them — Philadelphia, plus Burlington, Camden, and Delaware Counties — there was a net loss in domestic migration. That means more people moved out of those counties than moved in, among people relocating within the United States. Those counties still grew because of an influx of immigrants, as well as more births than deaths. 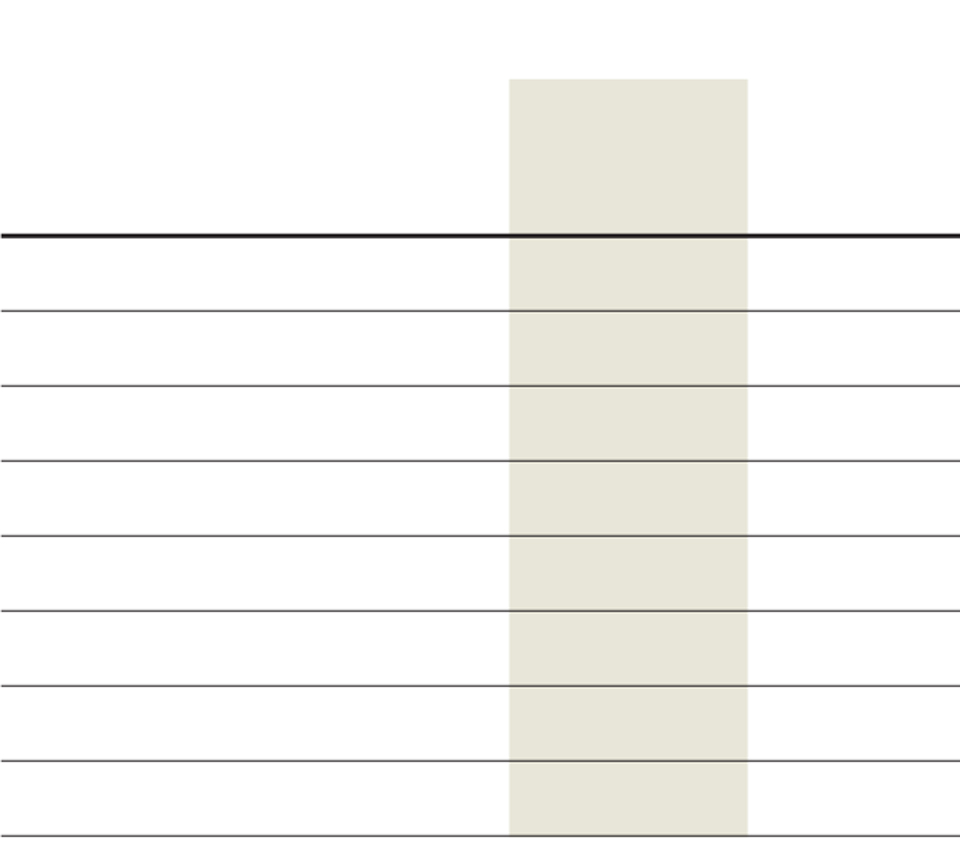 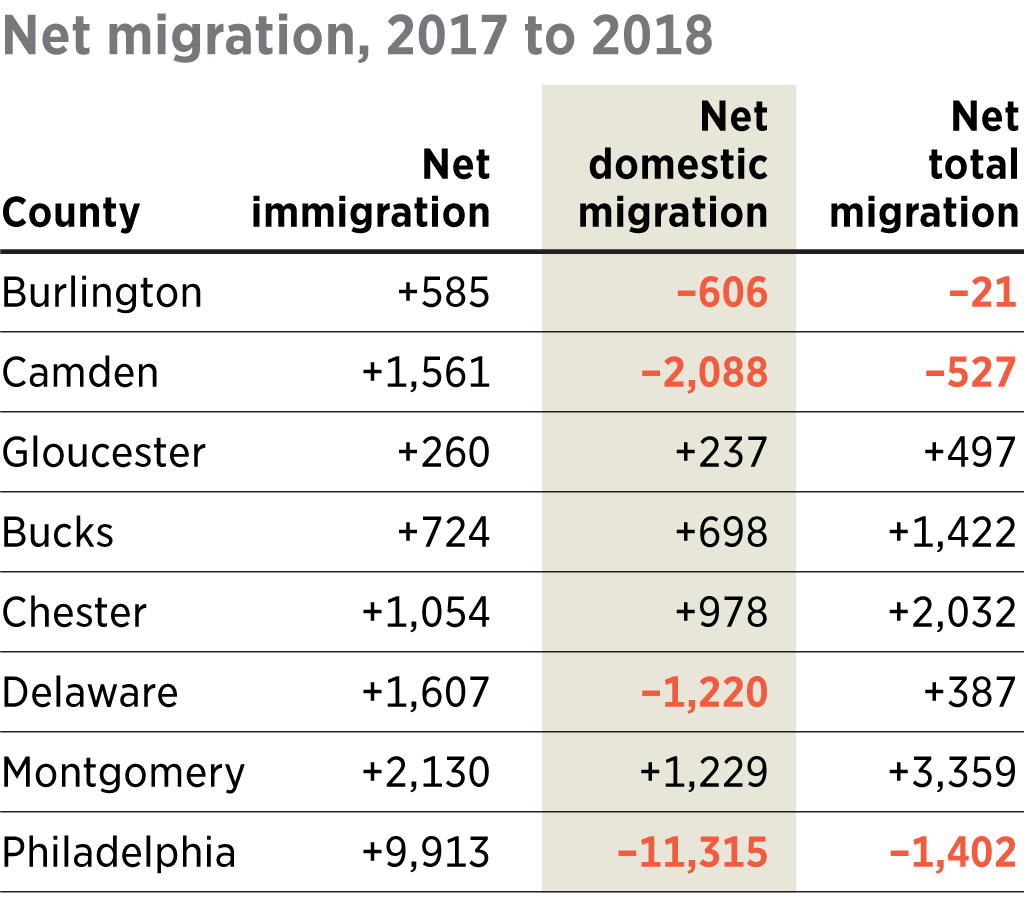 For decades, large numbers of Philadelphia residents have moved to neighboring counties. But since 2010, Philadelphia has grown faster than all of its neighbors except Chester County.

“Philadelphia used to be a blip in the regional growth, but during the 2010-17 time period, it contributed to half of the regional population growth,” said Gruswitz, of the Delaware Valley Regional Planning Commission, in a statement.

Bucks, Delaware, and Gloucester Counties have grown by 1 percent or less, while Burlington and Camden Counties have each seen population decreases of about 1 percent.

After decades in which city residents moved to the suburbs in droves, Philadelphia's population growth since 2010 has outpaced that of each of its suburban counties, except for Chester. Camden and Burlington Counties in South Jersey have each lost residents over the last eight years.

Immigration and births are growing the region

The number of people moving in from other countries outpaced the number relocating from elsewhere within the United States in Gloucester, Bucks, Chester, and Montgomery Counties. In Delaware County, arriving immigrants outnumbered residents who left.

Nearly 10,000 immigrants moved into Philadelphia between 2017 and 2018. That wasn’t enough to offset the more than 11,300 residents who moved out, so the city lost about 1,400 people through migration. But births made up the difference and then some.

Roughly 5,400 more people were born in Philadelphia than died between 2017 and 2018, when the city welcomed nearly 21,000 babies. During that period, births outpaced deaths in each county in the region except Bucks. There, slightly fewer people have been born than died each year since 2016.

Nationwide, more than half of counties — 56 percent — had more births than deaths.

Michaelle Bond
I'm an urbanism writer covering how people live in their homes, how the market directs choices, and how policies shape communities.

John Duchneskie
I am the Graphics Editor, wrangling data and pursuing visual storytelling by way of charts, maps, diagrams, and illustrations.