Are flocks of New Yorkers moving to Philadelphia (and what does it mean if they are)?

Philadelphians have worried about invaders from the north for years.

Apparently, many New Yorkers wake up one day and recognize that they live in extortionately priced shoe boxes amid an aggressive populace without backyards or inner peace.

So, they come here.

U.S. census numbers show that the flow of New Yorkers moving to our city is slightly greater than the drain of Philadelphians heading to the Big Apple.

The migration was sensed by an Inquirer reader who contacted Curious Philly, our Q&A forum that allows readers to send us queries about topics piquing their interest, and asked the following:

Is there an influx of New Yorkers moving to Philadelphia right now, and why?

It’s a good question, but not a new one. Philadelphians have been worried about invaders from the north for years.

An alarming poster in the National Archives from 1839 admonishes Philly folk to beware the “outrage” of a new railroad that could make Philadelphia a “Suburb of New York!!”

Sixty or so years later, labor contractors in New York would greet European immigrants fresh off the boat and funnel them to Philly for construction jobs, explained University of Pennsylvania historian Walter Licht.

In the following decades, locals were compelled to hear their city downgraded to a “sixth borough” of New York. An infamous 2005 New York Times story based on that nettlesome premise roiled Philadelphians unwilling to subsume their identity to a gaggle of Gotham trespassers.

To establish clarity, we checked some recent numbers, and it turns out John Grailing, 44, of Rhawnhurst, the reader who contacted Curious Philly, was right on.

Most of the New Yorkers coming here (an average of nearly 1,400 annually) are from Manhattan, but because most Philadelphians who leave for New York settle in that fancy borough (roughly 2,000 a year), Manhattan gains more people in the cities’ exchange of residents, the latest census figures show.

What Philly winds up with are more former Brooklynites than any other brand of New Yorker.

Census estimates show that more New Yorkers are moving to Philadelphia each year than there are Philadelphians relocating to New York. The chart shows the annual net migration — the difference between people moving in and moving out — between the two cities during two five-year periods. Philadelphia’s total net gain with New York is largely due to a large influx of residents from Brooklyn. 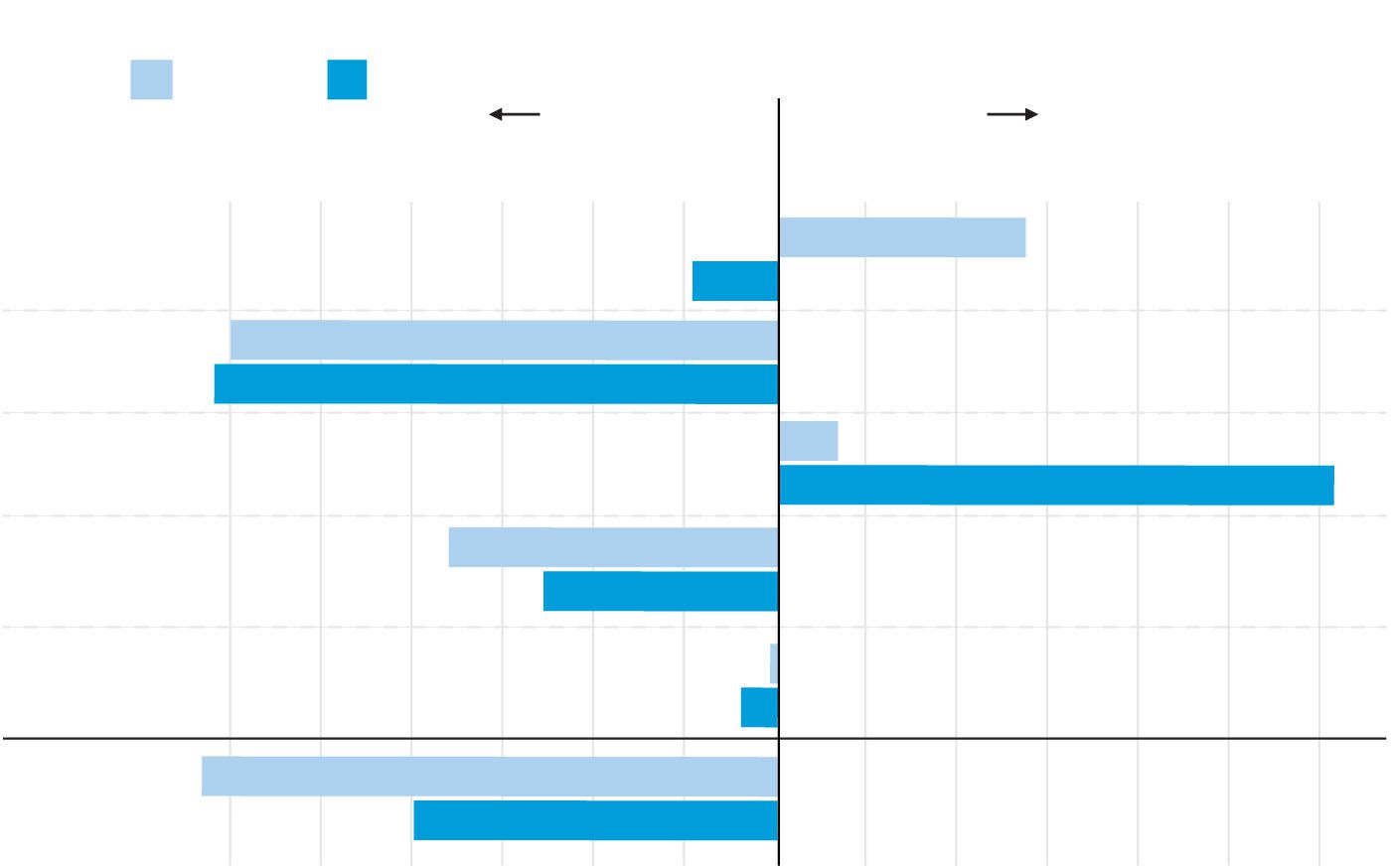 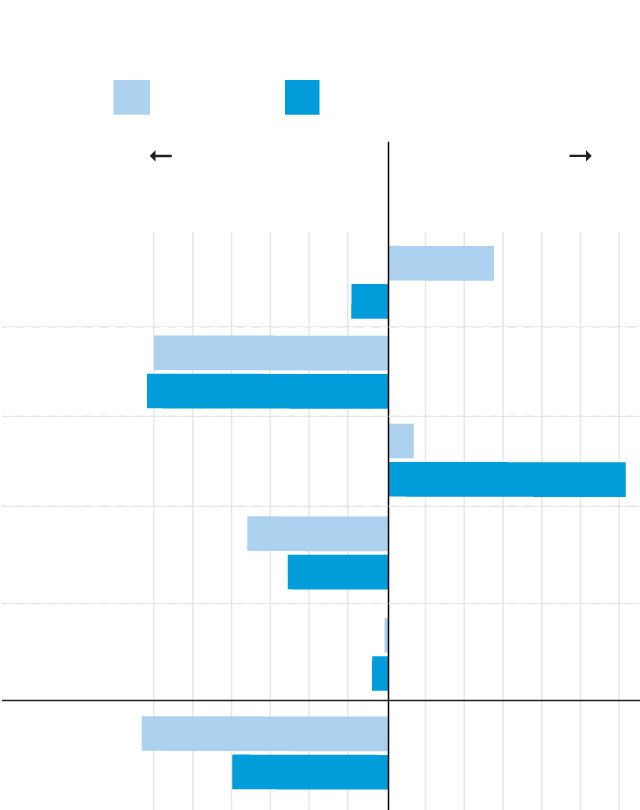 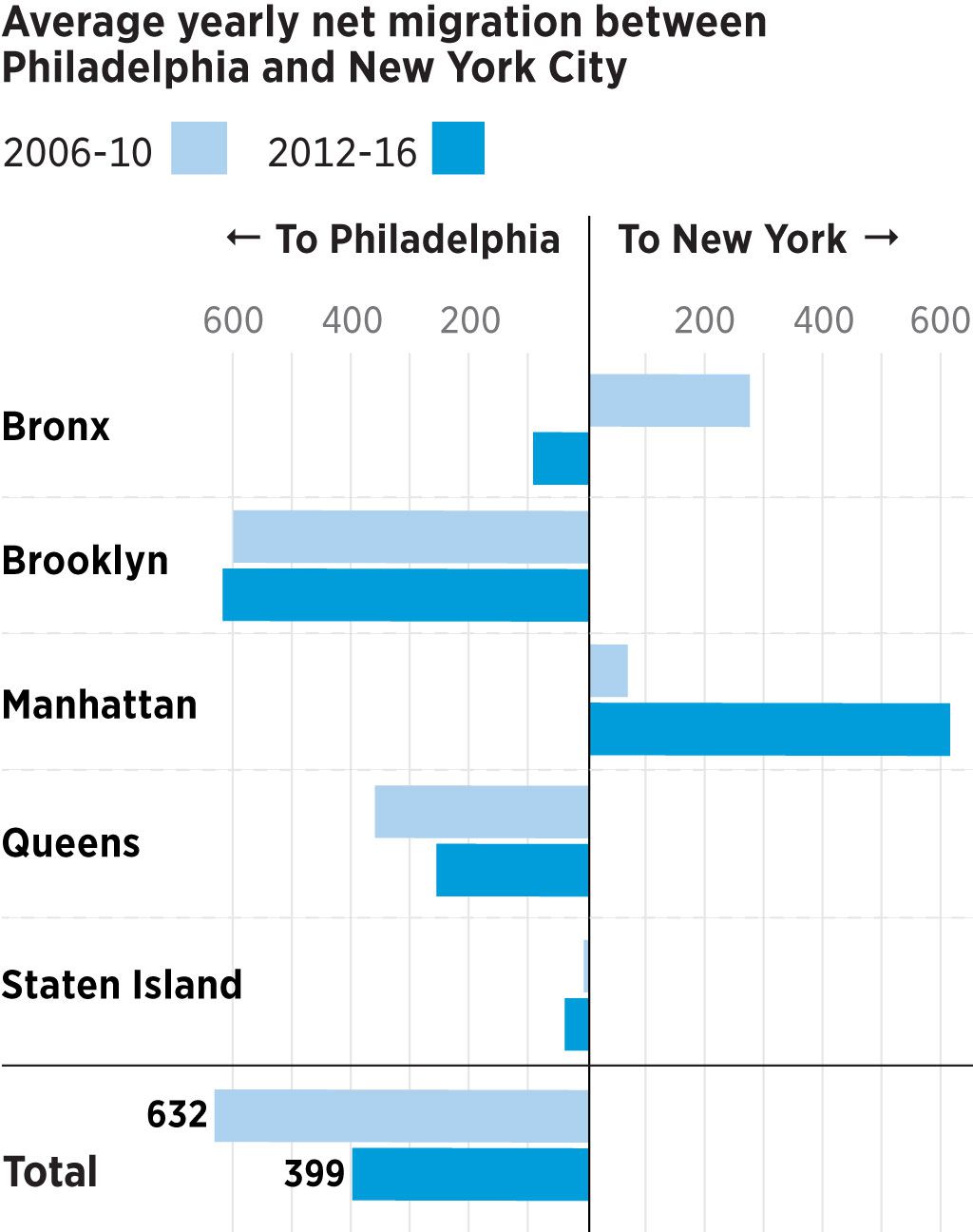 [Can’t see the chart above? Click here to view the complete article.]

“New Yorkers who are raising kids cannot pay every dime they have just for their walls anymore,” said Melodie Kahr, an associate broker at Berkshire Hathaway HomeServices Fox & Roach Realtors in Center City.

“New York real estate prices are two, three, or more times Philadelphia housing prices,” added Kahr, herself a transplant who was born in Manhattan, the borough with the water-beading high gloss, an island polished clean by money.

For many people, New York City is like the mammoth mayo jar you gawk at but don’t buy at Costco — too rich, too excessive. Philly, on the other hand, is the just-right size.

“It’s easier to live a better life in Philadelphia than it is to live in Brooklyn,” Elfant Wissahickon Realtor Christopher Plant says on his website, MoveToPhilly.com.

“I moved to Philadelphia [from Brooklyn] in 2002 and have not spent a minute looking back," he said. "My world got better.”

At least one of his Brooklyn clients swallowed the Schuylkill Kool-Aid Plant’s been selling and has never regretted it.

“We were looking for ease,” said Jeff Davis, 45, whose family quadrupled its square footage by moving from a $640,000 two-bedroom Brooklyn apartment to a six-bedroom Chestnut Hill house that cost $440,000. A Boston native, Davis had lived in New York for 17 years before moving here in 2007. He owns Vinylux, which transforms old records into new products such as clocks.

“New York is so emotionally and physically difficult and demanding to live with children,” said Davis, who with his wife, Nancy, has two kids, ages 12 and 15. “We had to get the hell out. And in Philadelphia, we got relief from the strain and intensity of being on-point New York parents.

“We know our neighbors. We have so many more friends here than in New York. And we’ve got a yard with a pear tree and a hammock.”

Given that many others are following Davis down the New Jersey Turnpike, how is that playing in Philly? Because it can be hard to love newcomers who show up with more money and worse driving skills.

“It’s human nature to be a little annoyed,” said Grailing, who posed the Curious Philly question. “I hate to seem immature, but New York is a rival in just about every sport. Still, I can’t say they seem obnoxious or anything.”

For many people coming from Brooklyn, Philadelphia reminds them of what the borough used to be like in the early 1990s, before hipsters descended. They tend to congregate in Fairmount and Fishtown, real estate professionals say.

“When people here get priced out of real estate that’s tripling in Fishtown or Kensington, and somebody comes in from New York and says, ‘Wow, I can pick that up pretty cheap,’ it’s definitely frustrating,” Reed said.

So far, there doesn’t seem to be a huge backlash, like in Oregon a few years back when people saw too many San Franciscans moving in and distributed bumper stickers that read, “Don’t Californicate Portland.”

Ultimately, it may be hard to hate people who grow to love your city and say stuff like what Jeff Davis, late of Brooklyn, likes to tell people:

Alfred Lubrano
I write about popular culture, the way we live, family, class, and poverty.