The city's latest four-bell chef: "What I'm doing is traditional sushi. I'm not reinventing the wheel. It's just about execution."

It's midafternoon and the front door is locked at Royal Izakaya on Second Street in Queen Village. The cellar door swings open for a delivery, and I clamber down the wooden steps, almost colliding with Masaharu Ito, who is bent over a stockpot filled with hijiki, an old-school Japanese seaweed salad that few local restaurants prepare. We both grin and shake hands. I'm here to see son Jesse.

Jesse Ito bounds over. He's lanky and 29 and has spent 15 years learning the craft of sushi from "Matt" Ito, who at 65 has been in the business for more than four decades, starting with Fuji, a destination restaurant first in Cinnaminson and later in Haddonfield.

The Itos sold Fuji in January 2016 to concentrate on Royal Izakaya, which opened in December 2016 with business partners Stephen Simons and Dave Frank.

Behind the bar, tucked behind a curtain, is Jesse Ito's 10-seat sushi counter, where he serves omakase tasting menus five nights a week for $70 and $130 a head. That is, customers put themselves into Ito's hands for one of the city's most critically acclaimed dining experiences. Ito's omakase just picked up a rare four-bell review from the Inquirer's Craig LaBan.

Tell me your earliest memory of sushi.

Sushi was always there, all the way back. I can't remember when it wasn't, because my father would just bring it home. I can't differentiate the memories. I started coming to the restaurant as an infant. I was at the restaurant more than home, so I was always around it. I was always eating it. It was just a normal thing.

When did he let you pick up the knife?

At home, he would let me use it and my mom would freak out. I was maybe 8. I was cutting really basic things. I started working when I was 14. That's when I picked it up again seriously. It was one day a week, maybe two days a week, just dish-washing, making appetizers and crème brûlée and pastries. Then I went on the hot side for the next four years. I only got put in the sushi bar maybe one day a week, just doing various simple rolls and stuff.

When did you decide to do this as a career?

There was a time when I was getting done high school. I wanted to go to culinary school, and my parents didn't want me to. They said absolutely not. I took all AP courses and I was the biggest slacker in all the smart-kid classes. By senior year, I was a straight C or B student. I was fine with that. But I got a big scholarship to Rutgers, so I went there for business, which was actually really good. I don't think I'd be here if I didn't do that.

I remember when I was 16, [Center City restaurateurs] Tom Peters and Fergie [Carey] had been customers forever. And I love them. I was in the sushi bar on Sunday. Tom and Fergie had their whole crew in the sushi bar and my dad was doing omakase, and I had learned some little business details I was proud of. I had told Fergie — I forget what. Then Fergie looked at me. He said I was an idiot. He was like, 'What the … do you think this is? This is a restaurant business. It's a business.'

So I went to business school. I started as management. The dean of Rutgers pulled me aside and said, 'Hey, you should switch to marketing.' I'm glad he did, because I think any business owner needs to really understand the principles of marketing. I think that's what'll really propel you in any business, not just … especially food.

Was Rutgers training for owning a restaurant?

No. At that point, I didn't know what to do. As much as I think that's healthy for anyone 18, 19, 20.  I did work full time, so it took me five years to graduate. I was really training for sushi hard-core after high school — real training. I was such a cocky young guy. It's so funny looking back, because I thought I was the best sushi chef ever. And it's crazy how different I am now.

As you get older, you just realize that there's so much more to learn and so many people out there who are so much better at everything. But you could always strive to do better instead of being so cocky about it.

It was probably when I was 23 or 24 that I said, 'This is what I'm going to stick with.' Because, toward the end of college, I had a bunch of adjunct professors for my business classes, and as much as I love marketing, advertising, and branding, I just couldn't see myself working in a corporate environment. I don't have that type of personality. I want to be my own boss. And I had an opportunity. Dave and Stephen popped up out of nowhere. When I think back, I just think I'm super-lucky with the opportunities that have been presented.

Dave and Stephen were customers for decades. Dave always [ate at] the sushi bar. I never knew what he did. He's the type of person who wouldn't tell you. Most people in Philadelphia don't even know what he looks like, which is what I like about them. They're not these showboat, 'Hey, I own this, this, and this; take care of me.' I never knew until we had our first meeting. That was when I was 24.

Tell me about the rise in sushi in the United States.

That's more of the trendy American style, which is very roll-centric, cheap costs, easily replicable because you can just buy a bunch of frozen fish and pull it out as you need it. There's cheap ingredients. You can use really low-quality fish and just cover it with a bunch of sauces. It's all carbs. It's rice, and fish, and seaweed. Now they use soy paper, which I hate. They're using brown rice and cauliflower rice. To me, that's all … . It's not sushi. Sushi means 'sour.' They used to ferment fish with rice over a year period. No vinegar or anything.

But I get it. Rolls taste good. You put a bunch of salty, spicy mayo with some nice fatty fish, it's going to taste really good. I get it, but everyone just copies each other. I'm not saying I'm not copying someone, of course. This has been done before. What I'm doing is traditional sushi. I'm not reinventing the wheel. It's just about execution. I always knew Philly had room for this growing up.

Do you think that a place like this could have existed 10 or 20 years ago?

No. Especially not the omakase. No way. I forget who told me, and I forget the study, but one of my customers said that they were reading in one of the business journals that someone did a study that the quality of sushi and the number of sushi spots are hand-in-hand tied to the wealth of the city.

I think Philly in the past five to 10 years is a very different scene than it was. Now you're going to see more omakase spots. Now you see Jean-Georges going in to the Four Seasons. There's going to be a different tier of restaurants as Philly gets richer. I think it has to do with wealth. A lot of people are moving from New York, D.C. I haven't looked at reports or anything, but it certainly looks like it's doing really well.

What are you doing that no one else does locally?

I love mackerels and the hikarimonos — all the silver-skinned fish, which a lot of people tend to say, 'I don't like mackerel. I don't like anything that's too fishy.' And I hate the word fishy. I think it's a little redundant. It has a very negative connotation. It kind of means spoiled. When you say fishy, it means spoiled. I would say gamey or strong flavor. But I do a very traditional preparation. I have my very own way of saucing and dressing it. People love mackerel. It's one of their favorite pieces of the night — the fish that they'd said they hate. It shows that it's all about technique and procuring good product.

Do you have an end game?

As for you: What do you like to eat?

I like good food. I don't have a favorite. I know that's a terrible response, but lately I've been going to Vernick a lot. Thursday, Friday, and Saturday, omakase is done at midnight, so I'll get out of here at like 12:20, 12:30, maybe 1. I'll be eating late-night food. I'm not going to lie. I've eaten Wawa more than I would like to say. I've had that moment standing in line where I'm like: 'This is very ironic. I just served all of these people the most expensive proteins available in the world, and I'm standing in line for this turkey-club sandwich at Wawa.' 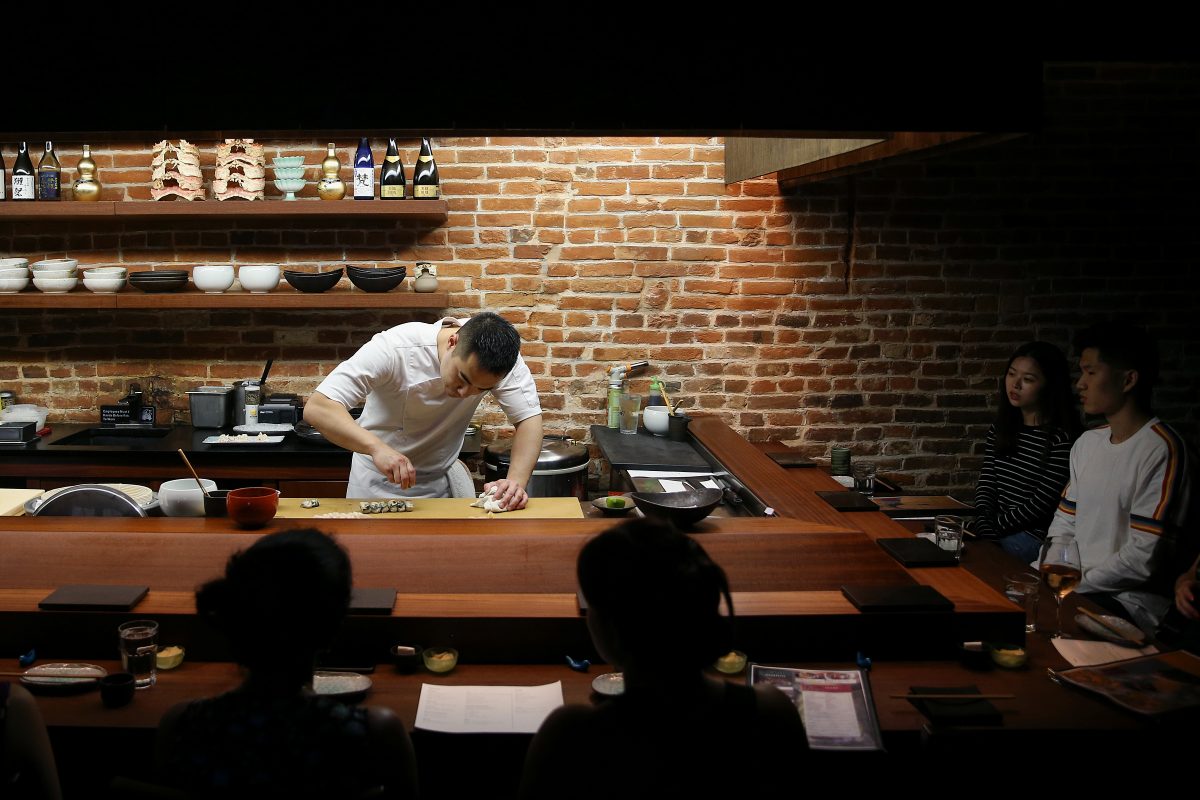 Chef and co-owner Jesse Ito prepares nigiri for the nightly omakase at Royal Sushi and Izakaya.

Michael Klein
I cover the food and restaurant scene, including businesses and the people.