A childhood friend of Councilman Kenyatta Johnson managed to leapfrog other developers — again — and make a quick $165,000 by flipping two city-owned lots in Point Breeze. City regulations are supposed to prohibit precisely those types of transactions.

Felton Hayman has done it again.

With the backing of City Councilman Kenyatta Johnson, a childhood friend, the Point Breeze developer sidestepped a thicket of city policies and made a killing in September by reselling two of three properties he purchased from the city just a month before at a fraction of their market value — money that could have gone to taxpayers.

Hayman pocketed $165,000 — 2½ times what he paid — in the deal, records show. Multiple city rules are in place to prevent precisely those types of transactions. In this case, the city ignored them, as well as at least four other developers who had expressed interest in buying one or more of the lots.

"For these properties, Councilman Johnson's indication that he supported the sale of the property to Mr. Hayman made Mr. Hayman the only eligible purchaser," Paul Chrystie, a spokesperson for the city's landholding agencies, said in an email this month.

The below-market land sales were made possible by the unwritten tradition known as "councilmanic prerogative," which effectively gives City Council members veto power over development in their districts.

The administrations of Mayor Kenney and Mayor Michael Nutter put in place safeguards to ensure that city land is sold at fair market value, thus protecting taxpayers' interests. But those safeguards proved useless in the Hayman transactions.

It's not the first time that Hayman, 50, a Johnson campaign contributor with a criminal past, has benefited from sweetheart deals with the city thanks to Johnson's support. The Inquirer and Daily News reported in 2016 that his company, Hayman Construction, bought three city properties in Johnson's district at prices far below their worth. Hayman then built and sold homes on the lots for as much as $415,000, despite promises to the city that he would create affordable housing.

Reached on his cell phone, Hayman dismissed any concerns about his latest windfalls.

"You got a right to make all the money you want," he said. "Why are you worried about these three lots?"

As it turns out, the FBI too has an interest in the sales. According to sources, the agency has subpoenaed city records pertaining to the transactions.

Hayman grew up with Johnson in Point Breeze. While Johnson ultimately went into politics and was elected to City Council in 2011, Hayman's path led him to 15 years in prison after he pleaded guilty in 1991 to third-degree murder. Police said Hayman, then a gang member, had helped concoct a plan to kill a rival drug dealer. The hit went awry when some of Hayman's coconspirators shot and killed the wrong man in a West Oak Lane tavern.

After release from prison, Hayman worked as a driver and legal assistant to a Philadelphia lawyer before going into the construction business. Johnson provided his old friend letters of support that proved invaluable in leapfrogging other developers in Point Breeze. Hayman contributed $4,600 to Johnson's campaign fund between 2012 and 2016.

Hayman's most recent purchases were finalized in August, four years after the developer notified the city of his interest in buying 2040 and 2046 Titan St. and 1200 S. Bucknell St.

The city's Vacant Property Review Committee in 2014 approved selling the lots for $12,852, $11,913, and $14,752, respectively. The committee, whose chair is appointed by Council President Darrell Clarke, used an automated system for establishing property values known as LAMA — shorthand for "land management" — that can lag far behind fair market value in gentrifying neighborhoods.

Philadelphia's policy at the time called for open bidding if more than one potential buyer has notified the city of an interest in a property. In the case of the properties committed to Hayman, each had multiple "expressions of interest" from developers.

Rather than triggering competitive bidding, which would have assured taxpayers the best prices on the properties, the interest from other developers was disregarded by the city in deference to Johnson's support.

A Vacant Property Review Committee fact sheet sent to the Redevelopment Authority states there had been only one expression of interest for the lots. Provided evidence to the contrary by the Inquirer and Daily News, Chrystie conceded that there were 16 potential bidders among the three lots. He said a city clerk had inadvertently typed the wrong figure on the fact sheet.

In June 2015, having previously given Hayman a commitment to sell the properties to him for a total of $39,517, the city raised the prices with appraisals to $31,000, $34,000, and $36,000 each. But even those figures likely represented outdated values for the lots, as they relied on late 2014 comparable sales at a time when the price of land in Point Breeze was soaring.

Developer Ori Feibush, a longtime public critic of Johnson, called out the potential sale in a November 2015 Facebook post that claimed the properties were being vastly undervalued by the city. Johnson's former legislative assistant, Steve Cobb, acknowledged in a response that there were "concerns regarding how it was appraised." Cobb, who has since left Johnson's employment, referred questions about the appraisals to Johnson. 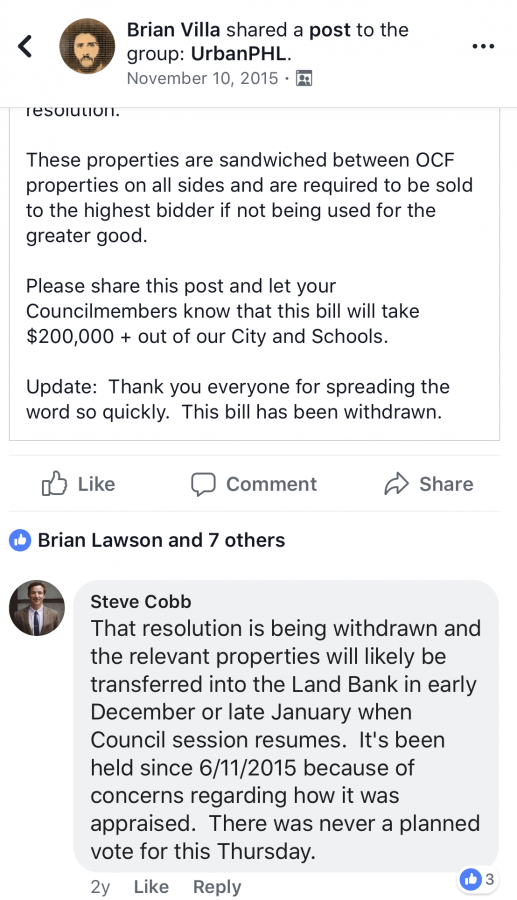 The transaction stalled for three years. Chrystie said that was in response to a federal lawsuit filed by Feibush claiming that Johnson had abused his councilmanic prerogative to prevent him from buying lots in the district. A jury ultimately awarded Feibush $34,000, finding that Johnson had violated Feibush’s constitutional rights.

Even though the city's current policy permits a sale price to be reconsidered if settlement isn't reached within six months, Chrystie said the city did not "feel it was fair" to ask Hayman to pay the current market value on the properties when he was ready to settle on them in 2015. That despite the fact that the city once before had adjusted the price of the properties.

In holding to the 2015 prices, the city ignored one of the "guiding principles" of its current policy: "Sell properties at fair market value if the proposed use is a strictly private one."

Before the authority voted to approve the sale, Anne Fadullon, the board chair, noted that the transfer of the properties to Hayman Construction would be subject to an Economic Opportunity Plan to guarantee that a portion of the construction work would go to minorities, women, or people with disabilities, meeting minutes show.

Hayman said in an interview that he purchased the lots "fair and square."

"I'm a straight shooter. Are you telling me an ex-con doesn't have a right to come back? I'm building houses," Hayman said. "You don't think that's a good thing? The city's got to get their sh— in order. I didn't do nothing wrong. I didn't set the prices."

City planning officials say they were caught off guard when Hayman quickly flipped the Titan Street properties to another buyer for a hefty profit. The sale had been approved with the expectation that he would build homes there, according to Jamila Davis, a spokesperson for the Philadelphia Redevelopment Authority.

In May, Johnson introduced a resolution in Council to close the Hayman deal. Outside Council chambers earlier this month, he declined to comment on the sales.

"I'm not going to talk about that now," Johnson said.

Johnson's attorney, Patrick Egan, said in a statement that his client had done nothing wrong. He said that the city landholding agencies had set the low prices under old procedures. He said Johnson was not notified that other developers were interested in the lots and was not updated on what Hayman did with them after buying them.

If nothing else, the episode runs counter to a claim Johnson made in January after the Inquirer and Daily News reported on a similar land flip. Johnson declared in an op-ed column that the days of no-bid sales and land flips were over: "Fortunately, that old system is in the past."

Daniel Saslow, whose Baltimore-based DYS Properties bought the 2040 and 2046 Titan St. lots from Hayman in September, said he would have gladly purchased them directly from the city for $115,000 apiece.

The money, instead, went to Hayman, who was described by his attorney, Robert Mozenter, as a "poster boy for redemption and rehab." He saw nothing wrong with Hayman turning a quick profit reselling under-priced taxpayer-owned land.

"Is anything illegal about that?" Mozenter asked. "This is America."