On a brisk, clear November morning at the Philadelphia Navy Yard, Captain Jesse Briggs nudged a tugboat’s bow against a barge loaded with steel beams. He sipped black coffee while two deckhands hopped off the boat and onto the barge to cinch the two tight.

The Penrose pushed the barge south down the Delaware River and turned into the Schuylkill, passing beneath two bridges and Passyunk Avenue and all the motorists on their commutes. Yellow leaves swirled on the narrow river until the tug mowed them over. Past the bare trees on the port side, junked cars piled up like mangled steel mountains. The starboard side was pipes and petroleum tanks. Sometimes tires roll down the bank and into the water, Briggs said by the junkyard, but sometimes something wild appears too, a reminder that waters are an environment, not just an economy.

The Delaware River, the Schuylkill, and the watershed that feeds them generate billions of dollars in revenue and taxes, a wide, murky vein that’s fed Philadelphia and other waterfront cities for centuries. Thousands make a living from the watershed, most of them south of Trenton where the river is deep and tidal.

The economics of the river, historically, have trumped ecological and recreational concerns in the lower Delaware, a resource for several states to tap.

“When I became mayor of Philadelphia, we were losing 3,000 jobs a month. There were very few options, particularly options for people who didn’t have an education,” said former Pennsylvania Gov. Ed Rendell. “For blue-collar workers, I thought the greatest chance for expansion would be the ingress and egress of goods on the waterfront. Those jobs there get a lot of overtime and a chance to make $100,000 a year. They’re like manna from heaven.”

Not everyone makes six figures on the river, and with the advent of automation, the days of the pure laborer are over. Machines guided by human hand, not muscle, do most of the work, meaning fewer hands are needed. Up and down the water, however, lives still revolve around the river, perhaps a side job or two, everything from canoe rentals to fishing guides to restaurants with a scenic view. Not for the faint of heart

Briggs and his deckhands work for River Services, pushing ships and research buoys, barges full of mud or fireworks, up and down the waterways in the city and beyond. Many at River Services began their careers working on the waterfront’s tall ships, the Moshulu and the lesser-known Gazela.

Briggs grew up in Norfolk, Va., at the mouth of the Chesapeake Bay, in a family of tugboat captains. He piloted tugboats before he could drive.

He moved north to get married and for many years, Briggs was the captain of New Jersey’s official tall ship, the A.J. Meerwald.

On this morning, the 55-foot Penrose was delivering steel to Southwest Philadelphia, where a pedestrian bridge is being built across the Schuylkill. River Services charged $475 for the run up the Schuylkill. Captains like Briggs are making anywhere from $300 to $500 a day and hourly workers for River Services make $20 to $40 per hour, owner Scott Cointrot says.

Which sounds good, but he cautions: “We work seven days a week, 24 hours a day."

Out on the Delaware’s channel, dredged deep to handle the serious traffic, ships 1,000 feet long come and go all day as well, some with cargo containers stacked 50 feet high on the deck, others with oil, steel, and sedans from South Korea down below. According to Pennsylvania’s Department of Conservation and Natural Resources, nearly 42 million gallons of crude oil are moved in and out of the watershed daily. The shipping containers unloaded in Philadelphia’s ports hold a mind-boggling array of goods: bananas, grapes, toilet seats, cocoa beans, and in June, even 15,500 kilograms (more than 35,000 pounds) of cocaine that was seized by the feds.

Holt grew up in Northeastern Philadelphia, and his grandfather started the family’s shipping business in 1926 with a single truck. Today, the family’s Packer Avenue terminal on the waterfront in South Philly can be seen for miles, its cranes perched by the water like metal leviathans. The largest of the cranes, called “Super post-Panamax,” run $12 million apiece. Holt recently purchased three of them while the state paid for two as part of Gov. Tom Wolf’s $300 million port investment plan.

“For the moment, we’re done,” Holt said on a tour of the facility on an October afternoon.

Holt employs about 1,400 people, most of them Teamsters and longshoremen. Many of the jobs, he said, are highly skilled, including the crane operators. The operator sits in a cockpit that’s nearly all glass, including the floor. It’s not for the faint of heart, careening out a few hundred feet over the water.

But many of the positions Holt needs to fill would require only a high school diploma, he said, and there’s ample training available. He mentioned the recent opening of the Citizens Bank Regional Maritime Training Center in Southwest Philly, which will help trainees with certifications.

We’re in a worker shortage, Holt said. “We need young people to aspire to jobs like this.”

Queen of the Delaware

The watershed also supports smaller, quieter professions, like the man who trapped eels in the upper reaches of the Delaware in New York or James Bintliff, the Burlington County man who collects a secret mud that’s rubbed on Major League baseballs. Steve Meserve nets shad every spring in Lambertville the way his ancestors did, but that’s more of a historical reenactment than an industry in 2019.

Then there’s Ruth “Queen of the Delaware” Jones. She’s 86, an only child who grew up on the Delaware in New Jersey and hasn’t strayed from the river. Other waterways and paddling destinations don’t interest her. The Susquehanna River, which cuts Pennsylvania in half, is too wide; the Pine Barrens of New Jersey a bit too dirty for her. On a recent November morning, she stood by the Delaware in Sullivan County, N.Y., holding her favorite wooden paddle. Pike County, Pa., where she lives, was just a few hundred yards away, across the water.

“The river was my playmate, my playground, and it became my best friend.”

Ruth “Queen of the Delaware” Jones

“The river was my playmate, my playground, and it became my best friend,” Jones said by the water. “I know the river like the back of my hand from Hancock all the way down to past the Gap as far as Belvidere."

“Below there,” she said of the little Jersey town a good 80 miles north of Philadelphia, "I wouldn’t even go near it.” 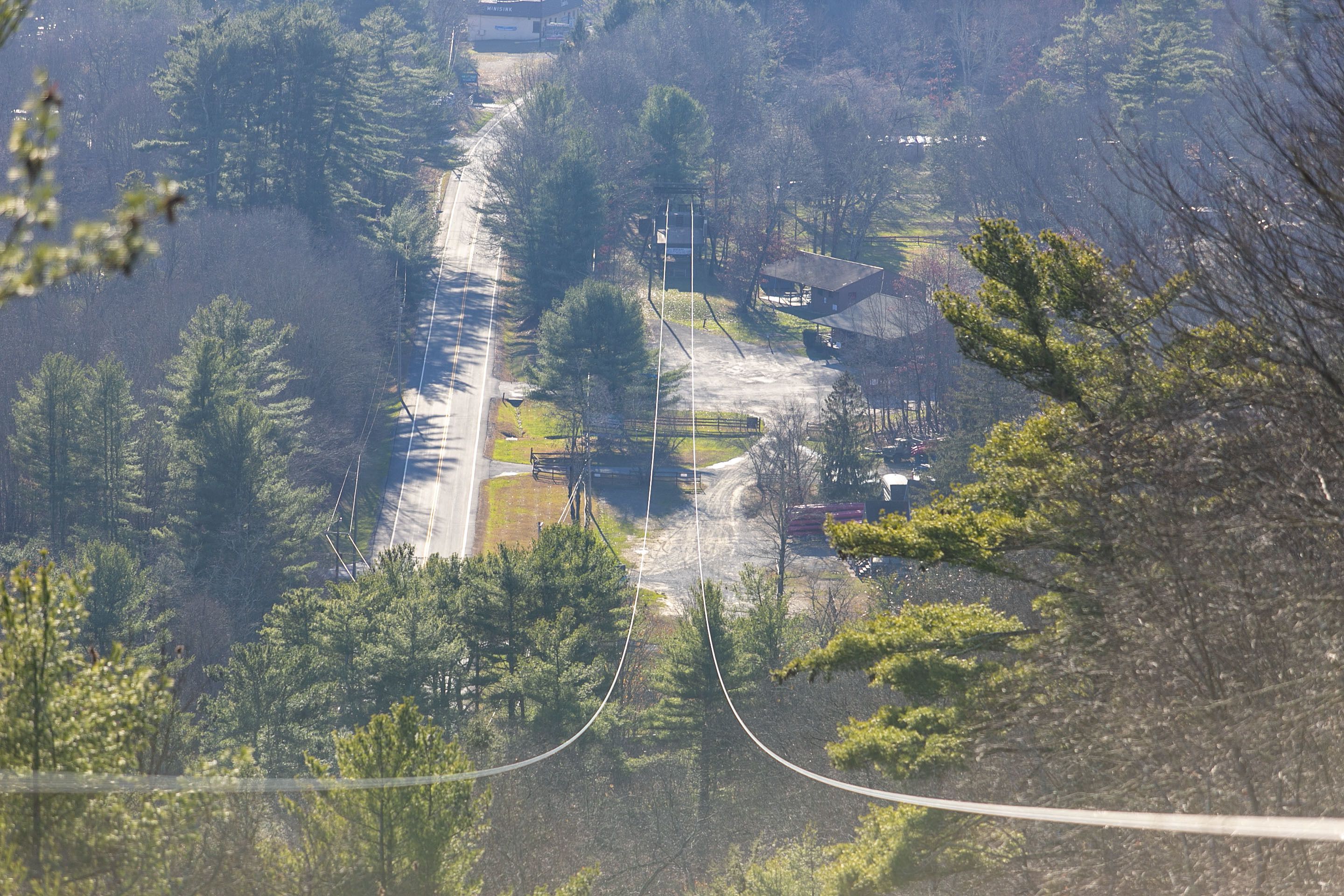 MIGUEL MARTINEZ / Staff Photographer
The zip-line at Kittatinny Canoes, a business that Ruth Jones has owned for many years near the Delaware River in Barryville, N.Y.

The family business, Kittatinny Canoes, started in 1941 on waterfront property her parents owned in what is now the Delaware Water Gap Recreation Area. At first, they just rented out their six canoes. But one day, a man asked Jones’ father, Ernie Olschewsky, whether he could load a canoe into his truck, and drive him upriver. By 1984, the family owned 1,200 canoes.

Jones believes Kittatinny is the nation’s oldest active canoe livery, and today, the family’s small empire includes multiple locations on the river along with several campgrounds.

“By word of mouth, people started coming and saying, ‘You do canoe trips, right?’ ” Jones said.

Her son, Dave Jones, said Kittatinny sends thousands of people out on the water each weekend in the summer. Most use rafts and tubes these days, instead of kayaks and canoes. Recreation in the watershed is still very much an industry, amounting to a little over $1 billion a year according to some reports. It’s an environmentally friendly way to make a living off the water, he noted. However many cans of beer that paddlers have dropped in the river since 1941, Ruth Jones’ annual river cleanups have more than made up. She organized the first cleanup in 1990 and in the decades that followed, collected a staggering 9,000 tires out of the water.

Jones said she’s canoed every square inch of the river. She uses a walker today and doesn’t get out on the water anymore, but it’s all still clear in her memories.

"I know every rock, every rapid,” she said. “Every turn.”

Jones has a favorite spot on the Delaware too. She wants her ashes spread there, but won’t reveal the location. It’s a secret she keeps with her best friend.

Editor’s note: “From the Source: Stories of the Delaware River” is produced with support from the National Geographic Society, the Lenfest Institute for Journalism, and the William Penn Foundation. Editorial content is created independent of the project’s donors. 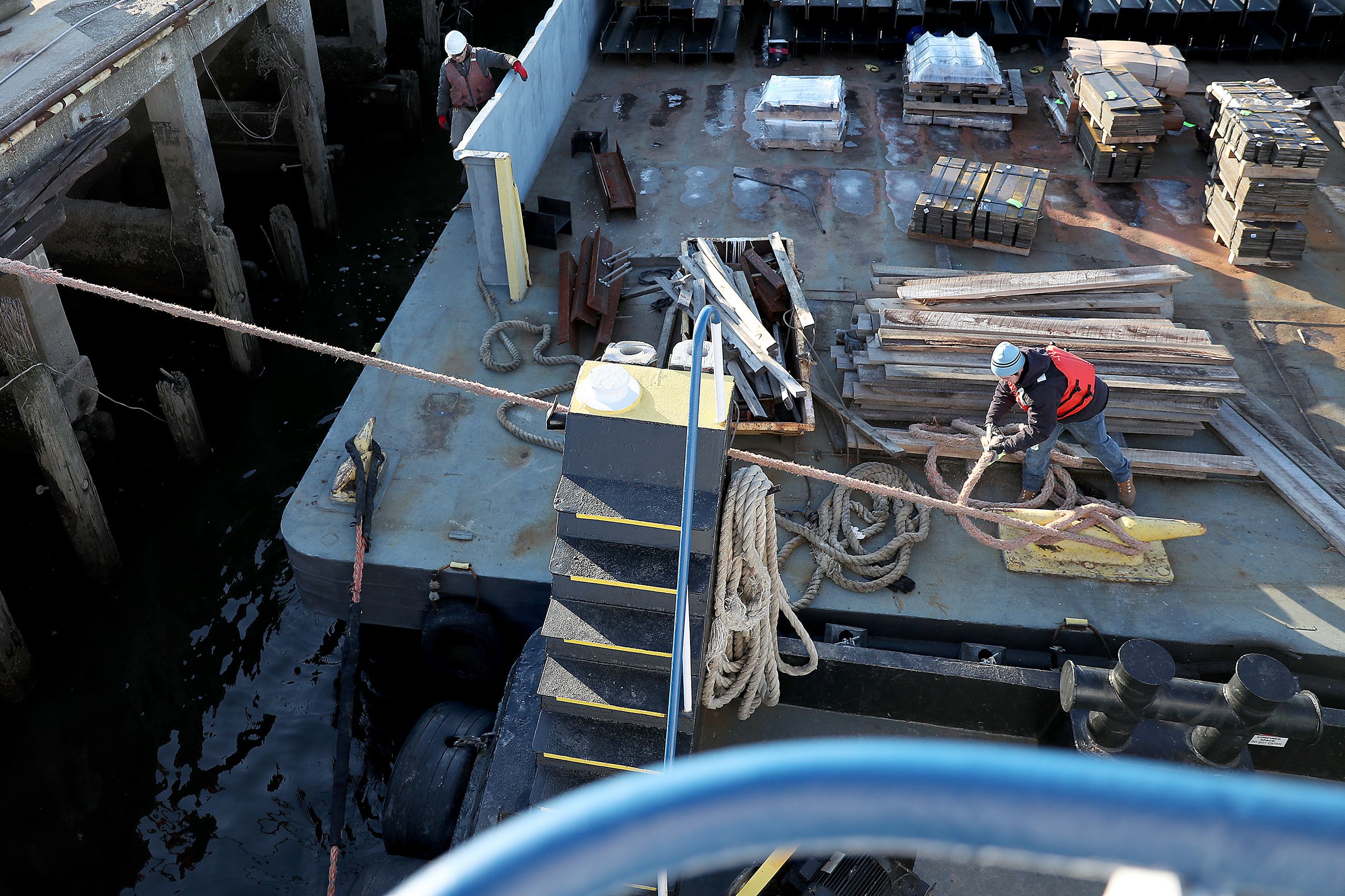 DAVID MAIALETTI / Staff Photographer
Alexey Bachmanov, left, and Adam Listen, right, who work for River Services, prepare a barge with construction materials to be moved up the Schuylkill by tugboat.
Good Reads

by Barbara Laker and Wendy Ruderman

by Barbara Laker and Wendy Ruderman

Philly Black Lives Matter activists contrast U.S. Capitol mob response with how they were treated: ‘Violence by white folks was met with grace’

Philly Black Lives Matter activists contrast U.S. Capitol mob response with how they were treated: ‘Violence by white folks was met with grace’

As shootings in Philly have surged, law enforcement has failed to deliver justice

As shootings in Philly have surged, law enforcement has failed to deliver justice