An Inquirer review shows there has been some change in prosecution of gun cases under DA Larry Krasner, while the U.S. Attorney’s Office has ramped up its violent crime caseload. Homicides and shootings are both outpacing last year.

As Philadelphia grappled with the aftermath of an unusually violent weekend, prominent local, state, and federal officials last week began pointing fingers and demanding answers about the city’s rash of shootings and homicides.

By week’s end, the dispute had erupted into a thinly veiled, and in some cases full-throated, blame game, set against the backdrop of a city rethinking how criminal defendants are charged, prosecuted, and sentenced — an initiative accelerated by District Attorney Larry Krasner, who has vowed to transform the prosecutor’s office.

None of the officials who spoke up — including Krasner, Police Commissioner Richard Ross, and U.S. Attorney William M. McSwain — offered conclusive data proving any specific policy responsible for the epidemic of shootings.

So what is driving the violence?

An Inquirer review of data indicates that the answer is more complicated than any one sound bite might allow.

Prosecution of gun cases has changed under Krasner, and the U.S. Attorney’s Office has ramped up its violent-crime caseload, The Inquirer analysis found. And crime statistics continue to fluctuate: Overall violent crime is increasing slightly compared with last year, after it had decreased 5 percent from a year earlier.

Through Thursday, Philadelphia police had logged 154 killings in 2019, an 8 percent jump from the same point last year. The number of shootings had climbed about 6 percent, with 631 victims in nearly six months, police statistics show.

McSwain has attempted to lay blame directly at Krasner’s feet, citing policies the district attorney has implemented since being sworn in last year, such as instructing his prosecutors to request cash bail less often and ask for shorter prison sentences after securing convictions.

Ross on Monday questioned whether police were arresting more people with illegal guns because “some of these guys [carrying guns] think they’ve figured something out, relative to consequences or lack thereof.”

Although Ross did not blame Krasner directly, the district attorney responded that his office in 2018 pursued a slightly higher percentage of gun cases referred by police.

The results: Krasner’s office secured a lower percentage of guilty verdicts and saw more cases tossed than the year before.

The decline in convictions — from 61 percent at the end of 2017 to 50 percent a year later — appears almost entirely due to more cases being withdrawn by prosecutors or dismissed by a judge early in the process.

In 2018, about 29 percent of prosecutions did not proceed beyond a preliminary hearing, the analysis shows, up from 18 percent a year earlier.

The reasons were not immediately clear. Cases tossed out early are often doomed by problematic evidence, witnesses failing to appear in court, or a judge believing that prosecutors had failed to make a sufficient argument to proceed to trial.

Krasner’s spokesperson, Jane Roh, said in a statement Friday night that gun prosecutions “are dismissed or result in acquittals for many reasons,” including lack of evidence, failure of witnesses to appear, rulings by judges, and “illegal conduct by police resulting in successful motions to suppress evidence."

“Any statistical analysis that fails to carefully delineate these causes sheds more heat than light,” the statement said.

The Inquirer’s review considered only cases in which a gun violation was the most serious charge — the same metric both Krasner and Ross referenced in their remarks last week.

Criminal justice experts caution against drawing conclusions based on data tracking charging decisions or conviction rates alone. Decisions on bail, how or whether cases are resolved, and what sentence a defendant receives if convicted all help to inform a wider understanding of current prosecutorial trends — and whether there’s a link to the city’s recent uptick in gun violence.

Krasner’s office said a fuller set of data addressing some of those topics would take more time to compile.

Krasner’s office in 2018 also began disposing more cases through a court diversionary program called Accelerated Rehabilitative Disposition (ARD), which allows defendants to have their record expunged after a period of probation.

During Krasner’s first year as DA, 78 gun-possession cases were disposed of in the ARD program, according to statistics his office provided. In each of the prior four years, the statistics show, no more than 14 cases were diverted to ARD.

Critics of Krasner have said his increased use of ARD offers leniency to those more likely to commit future crimes.

Krasner said in an interview last week that the aim was to avoid adversely affecting a “small category” of people who are otherwise law-abiding citizens and for whom a conviction would cause unnecessary harm.

Change also has come from the new federal prosecutor, appointed in April 2018 by President Donald Trump.

Between October 2018 and May 2019, McSwain’s office filed 62 new gun crime prosecutions — more than the 54 filed in all of 2018, and more than in any year since 2012, according to statistics gathered by the Transactional Records Access Clearinghouse at Syracuse University.

If the current rate is sustained, this year’s total could more than double that of last year.

Federal prosecutions of weapons-related crimes are on track to double this year in the Eastern District of Pennsylvania. U.S. Attorney William M. McSwain says that's a direct result of what he describes as a failure by the Philadelphia District Attorney's Office to effectively prosecute violent crime. 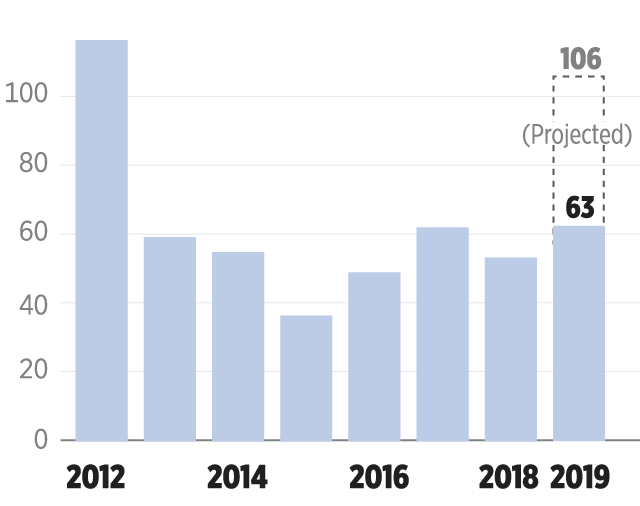 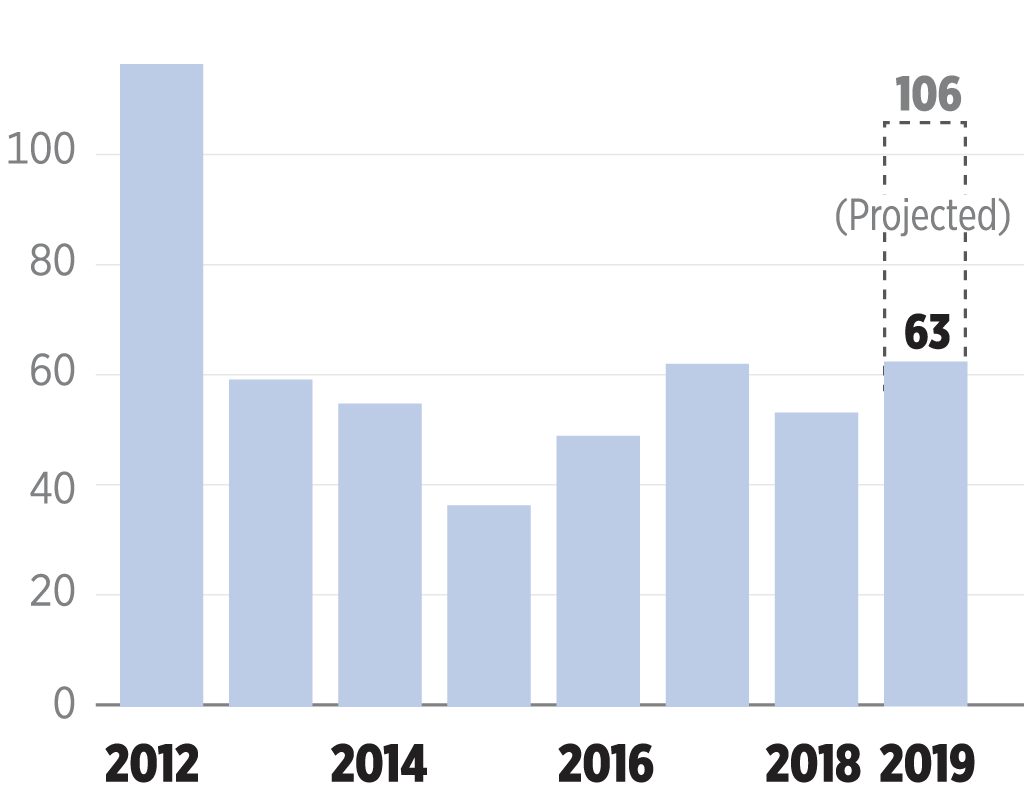 It is unclear how much of that spike in charges is attributable to crime in Philadelphia. McSwain said the city is the major driver of that increase, but his jurisdiction stretches across a nine-county region stretching from Philadelphia to Allentown and west beyond Reading.

His push to prosecute the types of cases he says Krasner is letting fall through the cracks also has corresponded to a wider national shift in Justice Department priorities under the Trump administration, which has refocused its efforts on combating illegal immigration and violent crime.

Still, McSwain says he is looking for ways to respond to what he called “the inadequacies of a District Attorney’s Office that is more interested in pursuing a political agenda.”

“There’s not the accountability that there used to be,” he said. “If there’s no accountability, the worst types of crimes are going to go up. I think that’s self-evident. In some ways, Commissioner Ross and I are just stating the obvious.”

To bolster his argument, the district attorney points to statistics compiled by the Police Department.

In 2018, Krasner’s first year, the city’s overall violent-crime tally — which counts homicides, rapes, robberies, and aggravated assaults — was 5 percent lower than the year before, the statistics show. That number has decreased every year since 2015, the statistics show, even as homicides have risen.

Through last Sunday, the number of violent crimes in 2019 was up about 2 percent compared with the same point last year. Still, Krasner said the statistical portrait of crime in Philadelphia is often absent when his detractors take aim.

“It doesn’t fit their narrative,” he said, “so they’re not going to say it.”

As the city has grappled with a surge in gun crimes, the police also have been solving fewer of them.

According to police statistics, the “clearance rate” for homicides — the proportion of cases considered cleared by arrest or other means — has not exceeded 52 percent since 2014. The clearance rate for shootings is worse, failing to top 30 percent in each of the last five years — meaning thousands of shootings have resulted in no arrests.

Ross on Friday acknowledged that a failure to solve shootings and killings can “absolutely” contribute to ongoing violence, because shooters who remain on the street can either feel emboldened to shoot again or become a target for retaliation.

Some Krasner critics say he has not helped matters by abandoning GunStat, a violence-reduction program initiated under former District Attorney Seth Williams in which prosecutors and police tracked offenders, shared intelligence, and focused on certain crime hot spots.

Krasner has said he believes that crime is a structural issue and that seeking to turn the tide will involve combating problems including the city’s poverty levels, struggling schools, and high levels of incarceration.

Still, he said the ongoing gun violence in the city “keeps me up at night.”

Julie Shaw
I cover crime and courts, with a focus on Philadelphia and South Jersey.