A northwest passage to Oregon: Portland and its beautiful surrounding area

If you've never heard a symphony of hundreds of sea lions, you have to visit Astoria, Ore., where the mighty Columbia River roars into the Pacific. Packed on low wharves and jockeying for space, the lions could be heard from our distant parking lot – a siren call of sorts, drawing us in their direction.

A visit to Astoria was on the itinerary for the 10-day trip my wife and I planned to Portland, its surrounding area, and the scenic northern Oregon coast. We sought a vacation that combined exploring a new urban center with opportunities to hike and encounter nature. The trip would also permit us to walk in the footsteps of Lewis and Clark and their Corps of Discovery (1804-06) at the end of their journey to the Pacific.

The Columbia River runs east to west and separates Oregon and  Washington. Portland, with a population of 640,000, is on the Columbia, 90 miles east of Astoria. On a clear day, one can glimpse snow-capped Mount Hood to the east, Oregon's tallest mountain, at 11,245 feet.

Downtown  Portland is clean and compact. It has an open, airy feel due to municipally required building setbacks, and is a delight to walk around. City blocks are short, skyscrapers few, the traffic light, and there is a mix of new and stunning older buildings. Interest in building preservation and reuse runs high. Retail, restaurants, bistros with local brews, green spaces, and fountains are abundant, and bike lanes are everywhere.

We began our visit with a guide-led group tour of downtown. We met our guide, John, at Courthouse Square, an open, redbrick, multilevel gathering spot. He said everything we had heard about Portland could be found, including great coffee, artisanal beer, farm-to-table cuisine, environmental responsibility, progressive thinking, and, from the show Portlandia, small houses.

His main goal was to share some Portland history and show us many of the city's distinctive features, including some of its 1,000 public works of art. We came across one right away, a block-long series of granite curbside fountains featuring bronze representations of animals native to the Pacific Northwest. Another, Portlandia, a huge, crouching, copper-clad sculpture of a woman, based on one on the state seal, looms over the entrance of designer Michael Graves's controversial, multicolor office tower.

We drank from one of the dozens of Portland's unique Benson bubblers – pedestal-mounted, quartet brass drinking fountains, installed in 1912 by a teetotaling industrialist seeking to reduce alcohol consumption on lunch breaks. We visited adjacent downtown park squares, once sexually segregated to shield women from the rough language and rowdy behavior of dock and mill workers. In the lobby of the Oregon Historical Society Museum, we saw the actual penny used in 1845 by Portland's two landowners to determine the city's name. It was a tossup between Portland, after the city in Maine, and Boston, after the Massachusetts capital, hometowns of the landowners. 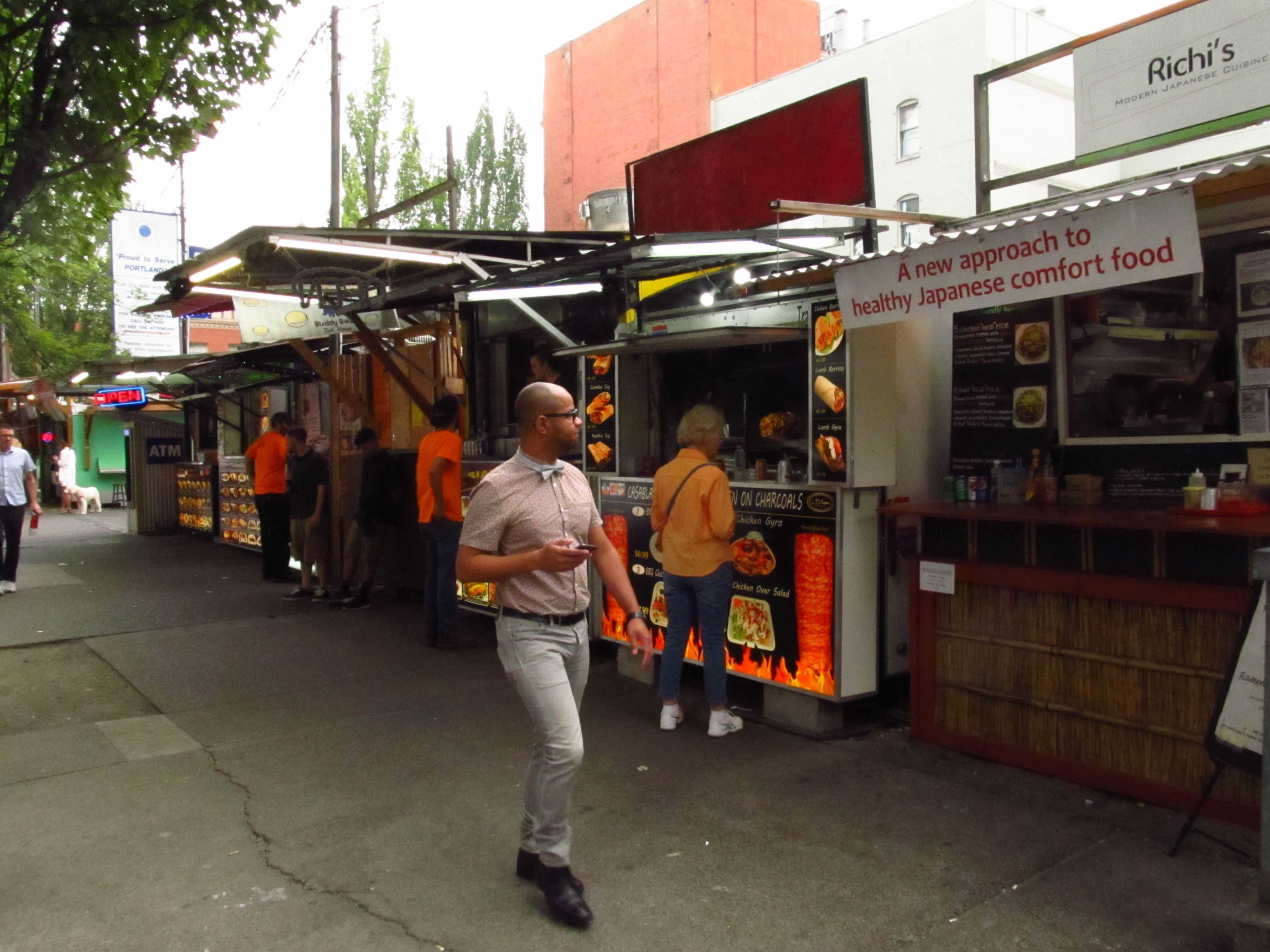 When our tour ended, John suggested nearby options for lunch, including a food truck "pod" popular with Portlanders. We tried the one he recommended. Our cooked-to-order lunches, a gyro and a cheesesteak, were delicious.

In the afternoon, we headed north to the Pearl and Chinatown Districts, home to restaurants and popular specialty shops, like Voodoo Donuts and block-size Powell's City of Books. These were tempting, but our priority was to visit the Lan Su Chinese Garden. Built by Chinese artisans with materials from China, the garden recreates the residence, pocket gardens, and ponds of a 16th-century Chinese scholar, artist, and poet. The setting was serene, and we thoroughly enjoyed it.

We spent our second day in Washington Park, where we visited the restored Pittock Mansion, commanding the city's highest point, and the Rose Test Garden.

Pittock Mansion, built in 1914, was the home of Henry Pittock, publisher of the Oregonian newspaper. A community effort in the 1960s saved the mansion from demolition, and the home and grounds were restored to their original grandeur. An overlook offers visitors a postcard view of Portland and Mt. Hood

The purpose of the park's large Rose Test Garden, known to horticulturists worldwide, is to propagate known and new rose species. Though it was early fall, we found a garden in full bloom, a function of Oregon's mild climate. Unlike the hybrid roses bred for long life sold by florists, the roses here were fragrant, and in every color imaginable. You don't have to grow roses to be lifted by this most worthwhile city attraction.

Astoria and the Lewis and Clark Encampment

On our third day, we departed for Astoria. Our main goal was to visit the re-created 1805-06 winter quarters of the Corps of Discovery. From there, the corps began its long journey home. Astoria is named for John Jacob Astor, who established a settlement there for fur trading in 1810, America's first settlement west of the Mississippi. Today, the city is a working fishing port, with a walkable downtown and riverfront, some excellent restaurants, and the not-to-be-missed Columbia River Maritime Museum, which we visited later.

Five miles south of Astoria is Lewis and Clark National Historical Park. Beyond the visitor center is a replica of the corps' log stockade, Fort Clatsop, named after the Clatsop Indians, who befriended them. The fort sits in a clearing believed to be its original site. Its design is based on notes and sketches in William Clark's journal. A 15-star American flag flies over the stockade, as it did during the 1805-06 encampment. It was inspiring to visit this site and stand where America's early explorers stood after their arduous and risky journey through an uncharted land.

A Final Day in Portland

Highlights on our third day in Portland were a visit to the Ira Keller Memorial Fountain and a return visit to the Oregon Historical Society Museum.

The Keller Fountain is a high and wide thunderous waterfall in the heart of downtown that is beautiful and spellbinding. A must-see sight at the Oregon Historical Society Museum is its permanent, award-winning exhibit, Oregon My Oregon. Its 50 displays of artifacts and interactive and re-created environments occupy an entire floor and tell the story of Oregon from its earliest inhabitants through the period of immigration and settlement to the present day. A re-created Hudson Bay ship hull shows the items exchanged with Native Americans for furs. Another exhibit features a Conestoga wagon and its goods, and actual clothing worn by pioneers. Oregonians take pride in the public discussion of contemporary issues. Their opinions are heard in two-minute videos activated when  visitors sit, appropriately, at a lunch counter salvaged from a former downtown department store.

We left Portland the next morning for the  northern coast. Oregon's coast stretches 363 miles along Highway 101 from Astoria to California, and the public owns every mile. The northern coast is rugged and stunning, with  white sand beaches,  but water temperatures in the 40s to  high 50s allow for only wading or the occasional quick dip.

Oregon's northern coastal towns vary in character and attractions. Seaside reminded us of New Jersey's crowded Shore towns. In contrast, quieter Cannon Beach, 10 miles to the south, has boutique hotels, fine shops, art galleries, and great restaurants — probably the finest on the north coast. Just off its beach is the enormous Haystack Rock, at 235 feet the largest monolith on the Oregon coast. Farther south are Nahalem and Wheeler, two riverside communities with ocean access that offer fishing, kayaking, and wildlife viewing opportunities.

Our 90-mile trip from Portland ended in Seaside, where we grabbed a lunch to go and headed north to nearby Fort Stevens State Park. At its northernmost end, we saw the turbulent waters created where the Columbia River and Pacific meet. We learned it was the nation's most dangerous port of entry for ships, and we saw evidence of that farther south on the beach — the rusted remains of a steel-hulled four-master, the Peter Iredale, which ran aground in strong winds in 1916.

The next two days we spent visiting scenic coastal parks. A short drive south from our Cannon Beach hotel was Hug Point Scenic Recreational Site. Hug Point's major attraction is the crescent-shaped beach at the end of a steep descent. Surrounding the beach are volcanic basalt and sandstone cliffs that amplify the roar of the ocean. At each end of the beach are headlands washed by waves. It is quite a spectacular site.

Farther south, stretching along four miles of coast, is Oswald West State Park, with trails that provide panoramic views of the Pacific. Our quiet and exhilarating walk through a preserved old-growth coastal rain forest took us to a wide, driftwood-strewn, cobblestone and sand beach, edged by forest and cliffs. Rocky headlands with sea-carved caves bookend the beach, and tidal pools at their bases can be explored for sea life at low tide.

The next day, we visited Ecola State Park, featuring nine miles of especially scenic coastline between Seaside and Cannon Beach. On one trail, hikers can literally walk in the footsteps of Lewis and Clark. William Clark described the vista from a coastal high point there as "the grandest and most pleasing prospects which my eyes ever surveyed." We enjoyed a challenging scenic trail through a quiet, old-growth forest, punctuated by great views of the ocean and shoreline far below. We also saw the long-abandoned 1880 Tillamook Lighthouse, rising from an impossibly small, rocky outcropping one mile from shore.

A Return to Astoria and the Columbia Maritime Museum

That afternoon, we drove north to Astoria and the Columbia River Maritime Museum. Visitors to the new, one-story structure are directed in a circular path through its many exhibits. The early ones drive home the ever-present danger to ships at the 14-mile-wide mouth of the Columbia River – some 2,000 vessels have been lost there since 1792.  Riveting films and exhibits show the rigorous nature of Coast Guard crew training there and the difficult nature of local navigation and rescues.

Through large-scale photos, artifacts, and narratives, other exhibits provide information on Astoria's founding and early years, the Native American tribes that lived there for thousands of years, and the fishing and canning industries that for decades provided Americans with seafood. Photos show the enormous fish catches of the past and the great diversity of the fishing and cannery work forces. One museum section is devoted to efforts today to return to Japan Japanese flags heavily autographed by soldiers' families and neighbors. They were taken as souvenirs from fallen Japanese. Especially moving is a video showing the emotional opening and inspection of a flag by a surviving brother and his wife.

Glass studios and art galleries on the coast feature beautiful round glass floats for sale, once  utilitarian items marking the nets of Oregon fishermen. Before returning to Portland and our flight home, we decided to try to create floats of our own. From Cannon Beach, we traveled 70 miles south to the Jennifer Sears Glass Art Studio in Lincoln City. Similar studios in Portland and along the coast require no glass-working experience. Under the guidance of an experienced glass artist, we worked at every stage of the fabrication process, including glass blowing. After the floats cooled, they were shipped to us. We were delighted with the results. This was the perfect ending to, and souvenir of, our immensely satisfying trip.